Posted on April 29, 2019 by Tasmanian Traveller

Under the deep blue sky of a brilliant autumn, early on a recent Friday afternoon Jeanette and I drove away from Hobart and headed south to Kettering.  The sun sparkled on a clean landscape and the expansive waters of the D’Entrecasteaux Channel beckoned.  This strait separated mainland Tasmania from Bruny Island.  The first map locates Bruny Island to the south east of Tasmania and the second map indicates the path of the D’Entrecasteaux Channel between mainland Tasmania and Bruny Island.

We parked second in the vehicle queue at the Kettering Ferry Terminal then we filled in time watching the nearby marina yachts bob gently.

Looking across to Bruny we could see our ferry on its way back to collect us.  You can watch it here.   Very quickly and efficiently we were loaded and moved off; the trip to cross the Channel took less than a comfortable 20 minutes. 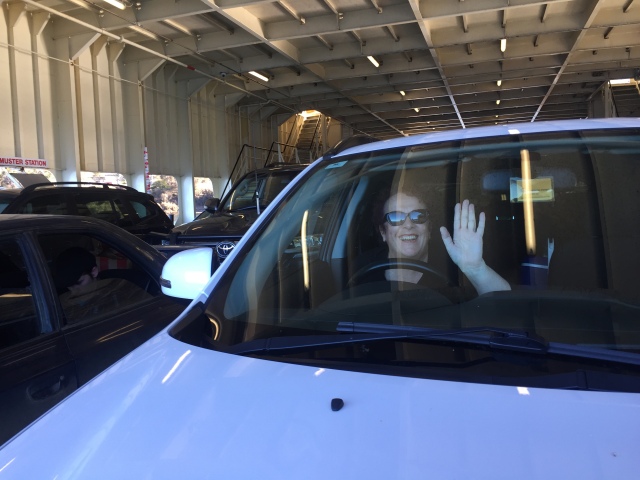 This was my first time travelling to Bruny Island despite being an old chick and having lived in Tasmania for much of my life.  Until now I had believed other locations would be more thrilling. Jeanette, who knew  Bruny well, had urged me to visit for well over ten years. Now I had relented. I would go. We would have a simple weekend away for a reconnaissance trip and then plan future walking and exploration excursions.

During the crossing the circular pens of salmon fish farms were spotted in the distance.  The hard shadows of the late autumn afternoon presented crisp outlines of hills, trees, water craft and the gullies and crests in the gentle waters of the D’Entrecasteaux Channel.  Wonderful. Colourful. I could feel my stomach fluttering with pleasure and anticipation.  It felt like I had made a good choice, albeit much belated, to visit Bruny Island.