Dandelions and ‘fake’ dandelions – part 1 of 7

Recently, in a blog post, I mentioned there were weeds that seemed similar to dandelions and I had always been fearful that I would fail to identify a plant correctly and perhaps poison myself if I tried to cook or eat some. A blog follower responded with surprise that ‘fake’ dandelions existed. Yes they exist. Yes we can say there are ‘imposters’ in the garden, in the cracks in the street pavements and ‘blotting’ the landscapes of vacant blocks. So thanks M; this series of posts is for you and anybody else who has never been quite certain of what a dandelion is, and whether you can eat those weeds/plants and/or it’s ‘imposters’.

What is a genuine dandelion and how can we identify it correctly?

To confuse the situation there are four genuine dandelions found in Tasmania; these are in addition to the look-alikes. Oh oh! ? (Not to mention other genuine dandelion varieties which only grow in other parts of the world.)

The key to Tasmanian plants offered by the University of Tasmania explains: ‘ Tasmania has two introduced and two native species of Dandelion (Taraxacum- Asteraceae). All four species are moderately similar.’ More oh oh!

The Taraxacum officinale (Tasmania’s common dandelion) is shown below in flower, with its seed head, and as a whole plant with leaves (photos by Greg Jordan).

The Taraxacum officinale ‘is a widespread and abundant rosette weed. It is almost ubiquitous in lawns and occurs widely in pasture, grassy road verges etc. The leaves are all in a basal rosette, and are soft, thin, quite light green and without conspicuous hairs. They are elongate, typically 10-20cm long and a few cm wide, with widely spaced, coarse, acute teeth. The flower heads are on the ends of sparsely hairy, elongate, hollow stalks. The flowers are yellow and all strap-like. The fruit are in spherical heads, with each fruit with a long (often about 1cm long) narrow section between the body of the fruit and the conspicuous pappus (the pappus is a modified calyx, the part of an individual floret that surrounds the base of the corolla tube in flower heads). The leaves and flower stalks exude a milky sap when damaged.

What are the other three genuine dandelions in Tasmania? 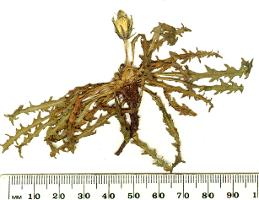 3. Information about the fourth genuine dandelion which is located in Tasmania, can be read here. ‘Taraxacum aristum is a rare native rosette herb found in subalpine-alpine grassland habitats. It is very similar to the widespread weed Dandelion (T.officinale) but differs in having outer phyllaries appressed to the inner ones, and in the leaves which have only shallow, but regularly arranged teeth.’

The leaves of the common dandelion Taraxacum officinale are an excellent source of vitamin A, vitamin K, calcium and iron plus the flowers and roots are all edible.

HAS THIS TECHNICAL INFORMATION BEEN TOO MUCH? Is there a simple way to identify the common dandelion at a glance? The answer is yes.

For blog followers in the Greater Hobart Area, it is unlikely you will see the last three dandelions unless you travel intrastate (one dandelion is in a town in the north east, one on an island to the north of mainland Tasmania, and the other in alpine and semi alpine environments). Therefore, most Hobartians will only have the problem of distinguishing the common dandelion from the look-alikes.

In tomorrow’s blog posting, I will show you some weeds which might be confused with the common dandelion.

It may show my limitations but perhaps you are like me: you identify dandelions as a low level weedy plant with yellow flowers. These have seemed like they could be dandelions but at the back of my mind has always been the thought other low level ‘weeds’ with similar yellow flowers exist. Until now I have never been sure. Tomorrow’s blog will introduce a couple of ‘fakes’ which turn out to be perfectly good plants for the garden and for the salad. Your culinary options are now about to explode!

2 Responses to Dandelions and ‘fake’ dandelions – part 1 of 7