Posted on June 4, 2020 by Tasmanian Traveller

This blog post introduces you to a salad recipe and a process to create savoury patties using non-astringent persimmons.

Julienned persimmon in a salad

To accompany savoury patties (see below) I chopped mushroom caps, cos lettuce, red capsicum, spring onion, cucumber, zucchini and threw these together with pitted black Kalamata olives, and pickled capers to make a salad. A small amount of rock salt was ground over the bowl. I chose one non-astringent persimmon and after peeling and removing the calyx did my best to julienne half the fruit – but lacking the necessary knife skills, the pieces were not so fine. Nevertheless, I mixed these through the salad, and topped off the salad with a splash of extra virgin olive oil and stirred through.

The saltiness of the olives and the acid from the pickling of the capers sufficiently balanced any sweetness of the persimmon. Very fresh and clean and delectable. And juicy.

Four non-astringent persimmons were used in this recipe. The other ingredients were two garlic cloves, 3 small medium hot chillies from storage in olive oil, one onion.

These four were blitzed in a blender until very finely chopped. 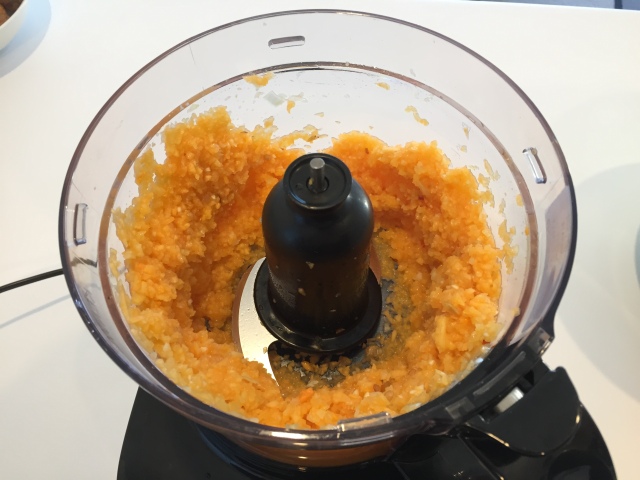 In the mortar and pestle locally grown walnuts (courtesy of friend F), almonds, brazil nuts rock salt, and olive oil were pounded together. 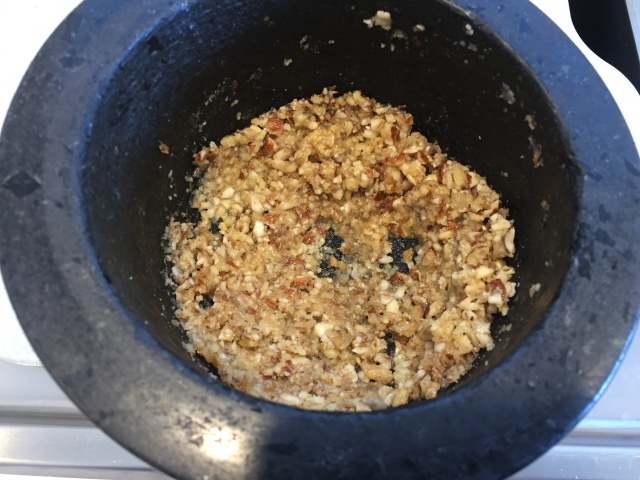 Elsewhere, the leaves of a large handful of Italian flat parsley were roughly chopped.

All ingredients were then mixed in a bowl. 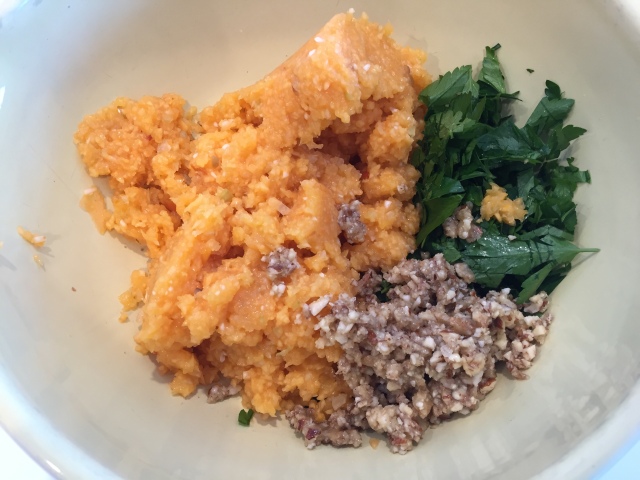 Over this was spread Besan flour with the intention it would help bind the patties, as well as provide more protein in the meal. Extra virgin olive oil was splattered across and more rock salt was ground across the bowl before all ingredients were stirred together.

I placed the bowl in the fridge for an hour to settle with the intention that it would make the patties easier to form and hold together.

The patty making was easy and 12 were produced.

The patties were shallow fried these until caramelised on both sides. The photo below makes them look burnt but they weren’t. 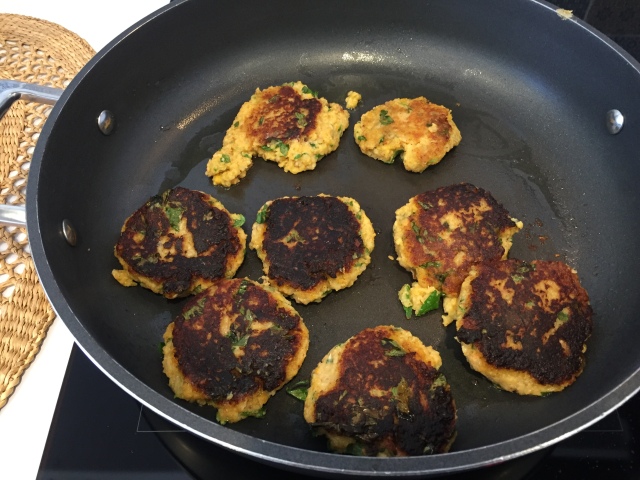 Of course this quantity was too much to eat in one sitting so I hoped to freeze some patties when cooked. Alas, without an egg or aquafaba to bind they barely held together – certainly not sufficient for getting into the freezer intact. So they were eaten over a number of sittings!

What was the taste like? Certainly savoury, but rather sweetish on their own. Three on their own would have been somewhat cloying but with the salad described above, they were perfect. They needed the freshness and acidity that the salad offered. Alternatively squeezes of lemon and/or lime juice across the patties would  make them lip-smacklingly edible.

I found three patties were very filling from the meatiness of the nuts.