Posted on June 3, 2020 by Tasmanian Traveller

You may not be able to access non-astringent persimmons, so bear with me on this series of blogs. Perhaps there will be ideas here for use with other produce which comes your way. Below I have created recipes for jam and a chutney style sauce using these persimmons.

Four persimmons were peeled, their calyx removed, and then sliced and cut into small pieces. 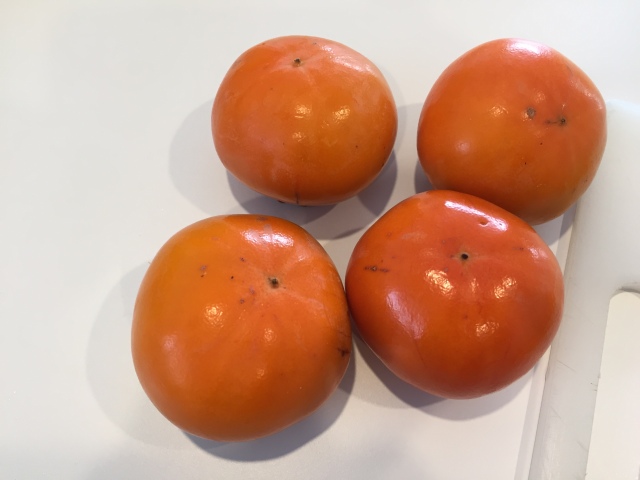 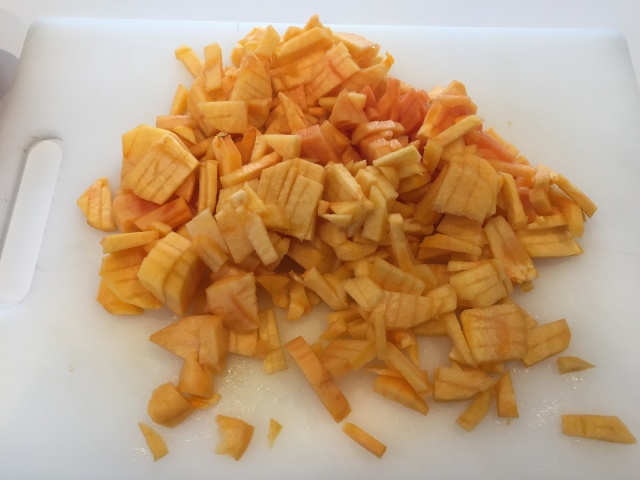 The fruit was added into a pan on low heat without extra water to allow the natural juices to begin to flow.

After 15 minutes, three or four teaspoons of raw sugar were strewn across the chopped fruit and stirred in. To add pectin, the rind of one of fellow RTBG’s S’s large lemons was thinly removed and chopped. The remainder of the lemon was juiced. The rind and juice were added to the pot. Over time the contents simmered down to a much reduced quantity and samples were found to set on cooling. The taste was sweet and picked up on the acidity of the lemon. Pleasantly.

Jam was made and poured into a sealable jar ready to be enjoyed over winter.

Using persimmons to make jam can be counted as successful.

Into the saucepan I poured a good covering of apple cider vinegar then added a coating of turmeric, allspice and ground white pepper, four chopped garlic cloves, a teaspoon of minced ginger, two chopped onions, a handful of my late cherry tomatoes, a splash of extra virgin olive oil, a large carrot sliced, and rock salt crystals.

I removed the calyx from nine persimmons, then peeled and sliced each.

I brought the mix to the boil and then simmered for half an hour. By that time, the wet ingredients had broken down to various degrees releasing water. The pot contents seemed like a soup containing chunky bits.

The pot load were poured Into a blender and whizzed until the soft material blended. At this point I tasted some and was surprised that the integrity of the carrots remained. Cooked, but not limp and lost. Tiny bits were evenly distributed throughout the sauce and made a welcome contrast to the smoothness of the remaining blended ingredients. Is there something about the chemistry of the vinegar and/or persimmon that keeps the carrot firm? Regardless, I am grateful for that texture.

The colour was that of baby poo and so incredibly unappetising to look at. But when I closed my eyes and ate, it was a delicious sweet and savoury combination sauce. The persimmons naturally are not a sickly sweet fruit, nevertheless this sauce was imbued with a sweet quality. Thankfully the vinegar and the black pepper balanced this out. If I must say so myself, this chutney style sauce makes great eating. In particular I imagine it would be terrific with pork, or pork sausages. As a sauce I feel it will complement the flavour of steamed Brussel sprouts, be great on toast, and work well with grilled tomatoes.

Brimming with happiness from the success of this cook, I have now stored the sauce into sealable jars.