Posted on April 15, 2020 by Tasmanian Traveller

Day two of my two hour walk plan. Where to today? I set off, again towards Bellerive Village but this time passing down closer to the waters’ edge of Kangaroo Bay.  From there I plodded casually around Bellerive Bluff until I reached Howrah Beach, then I turned inland and walked along suburban streets. So what did I see and what did I think?

I started out on an overcast day. From Kangaroo Bay I looked towards the mountain and then back towards the bay shoreline.

I looked down into the Bay at the clear water with its surface dimples, and wondered if I would be lucky enough to see dolphins. Alas not today. 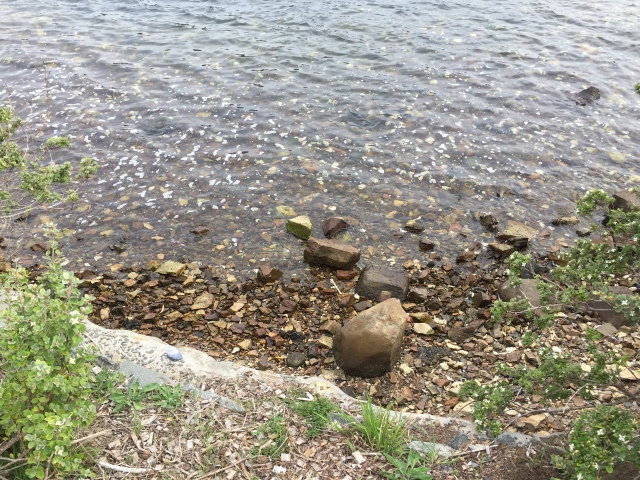 The fresh growth on a wattle and a casuarina tree arrested my attention.  Must have been caused by the recent rains followed by occasional warm days.

The painterly quality of the bark strips on a few of the eucalypt trees were particularly colourful in the range of browns and siennas. 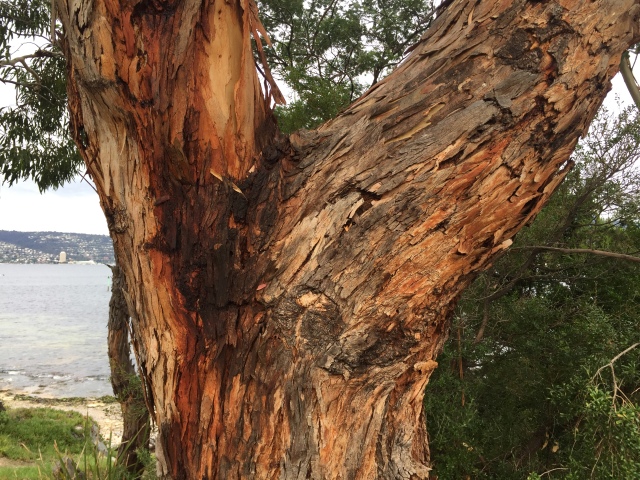 In the grass, I passed a marker indicating I reached Bellerive Bluff.

Soon after I looked across a weathered sandstone terrace and noted the empty mussel shells clustered in depressions within the rock surface.

Somebody had thoughtfully reminded me I was walking where once the eminent scientist Charles Darwin had walked. He was in the vicinity during February 1836.

I was impressed with the activity of the Landcare team for Bellerive Bluff. A considerable number of trees and shrubs have been planted to stabilise the soil after thickets of weeds and exotic plants had been removed.

As I neared the Howrah Beach, while still atop a hill, I looked down and loved the simplicity of the land meeting the water of the Derwent River.

Finally the length of Howrah Beach showed itself edged with lacy waves still moving in and out.

As I returned home via the Bellerive Boardwalk I surprised a gathering of ducks, before moving on to pass by the Bellerive Marina. 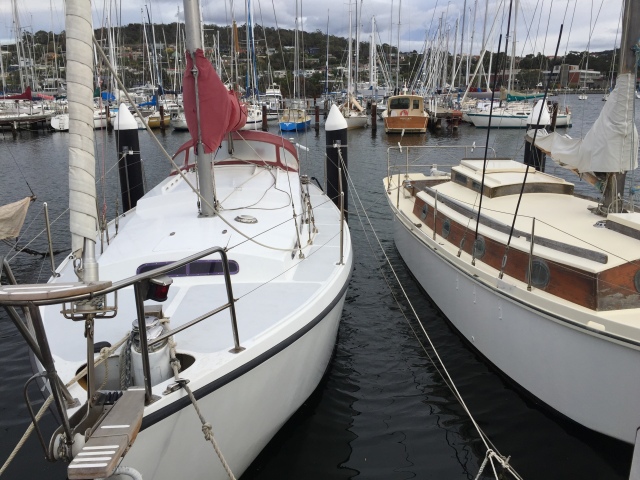 This was a soft, gentle walk that fitted appropriately with the soft grey skies.  Naturally pleasant.  A series of wonderful calming moments.