Posted on January 16, 2020 by Tasmanian Traveller

It’s a Thursday but I haven’t volunteered at the Royal Tasmanian Botanical Gardens (RTBG) as expected. I spent the night coughing like a smoker and was much sleep deprived by morning so decided not to volunteer today.

As the whole world knows, many parts of mostly eastern Australia have been engulfed in dramatic and killing flames. These fires have connected with each other in places and the amassed conflagration has turned properties into ash, and caused the death of dozens of people and billions of native animals and birds and insects.

Australia doesn’t have scientists as decision makers for the nation so there is resistance from those in power to understanding the impact of humans on this planet. The result is levels of governments which applaud Australia’s coal burning emphasis and deplore lots of alternative energy producing methods. These supports a plethora of intensive regulations and legislation so that lower level decision makers become hesitant to conduct regular burn-offs of dry scrub. Of course it may be that the tipping point has passed and regular burn offs, as the original land dwellers before European settlement used to undertake to manage the vegetation, cannot be undertaken in many places. The build-up of dry under-storeys is now too dense in places to enable a managed fire.

Yesterday Hobart was shrouded in smoke blown from Tasmanian fires in the primitive wilderness forests of the west and south west and from the fires to the distant north in the State of Victoria, the smoke of which had travelled 1000 km by crossing the Bass Strait and then mingling with the smoke of our own fires to blanket Tasmania. During the day I checked the Air Quality index for Hobart and further afield.

I could see from my home windows that Mount Wellington had disappeared from view and mostly it was impossible to discern the Derwent River and the western shore of the Greater Hobart Area. The smoke haze was thick and dirty pink. So I went online to check the official rating of the air quality.

At 1pm it has risen to an even more unhealthy level as follows:

The worst it became for the day was a rating of 168. Then the smoke lingered. Wind was almost non-existent. Despite a closed house, by the time I went to bed last night tiny smoke particles had infiltrated through various nooks and crannies. I slept fitfully waking often with a smokers cough and gritty throat. Awful. Not breathing easily.

Then I remembered that I had checked the air quality in south east Victoria during the afternoon to compare with distant Hobart – it’s numbers were astronomical. 400s, 500s and 600s. And I thought I had problems! Sadly air quality is not the only concern for the hundreds of thousands of residents and tourists in these affected areas.

Tennis players at the Kooyong Classic in suburban Melbourne had to be helped from the courts suffering respiratory problems yesterday. Then the Australian Open Grand Slam tennis tournament organisers (which starts next Monday) attracted the free involvement of a number of globally known professional tennis greats to play some entertaining tennis for an enclosed arena full of paying spectators as a fund raiser for those affected by the fires. By the end of the night almost $5 million had been pledged and donated by supportive Australians and visitors to our smoky country. Elsewhere other charities and businesses are receiving millions in donations. Collectively these contributions will give some help to those who have lost much, and for rehabilitating injured animals.

Today, a mild thunderstorm and drizzle in Hobart has washed down some of the smoky particles but Mount Wellington across a dimly lit Derwent River is barely in sight. 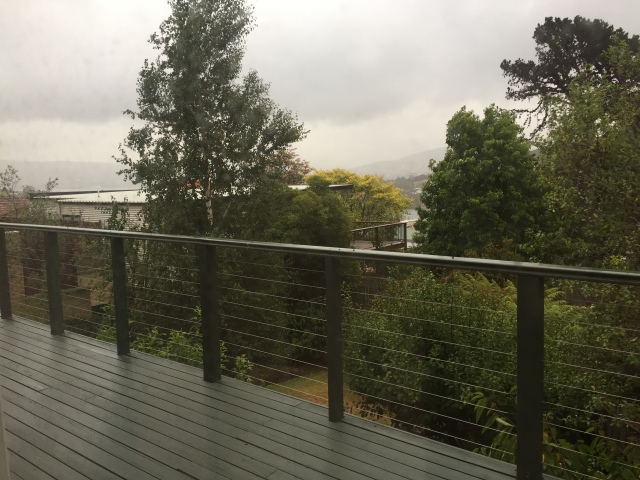 I was hoping for a deluge to clear the air, deeply wet the soil and, if I had been at the RTBG, make it easy to pull weeds. I hope my fellow volunteers are enjoying their day.

The latest report on the air quality closest to my home is encouraging:

Alas for those on the south eastern corner of the mainland.