Posted on December 11, 2019 by Tasmanian Traveller

Tuesday you see in the title and probably furrow a puzzling brow.

Isn’t Thursday my day for volunteering at the Royal Tasmanian Botanical Gardens (RTBG) you think?

In a far distant blog post I told you that the RTBG has volunteers for different garden functions and sections; this means non-Food Garden volunteers may be in attendance on any of the other six days of the week.

Recently a mass email was sent to all RTBG volunteers asking for short term ‘seed sweepers’. I had no idea what this meant but, being eager to learn, I expressed an interest.

Days later I was sent information and an invitation to attend an induction session. This was held yesterday. Then, not only did I learn what to do, I was able to spend an hour actually doing the seed sweeping. So, what is the story?

I arrived at the RTBG on a gorgeous blue sky day dusted with high level wispy clouds. 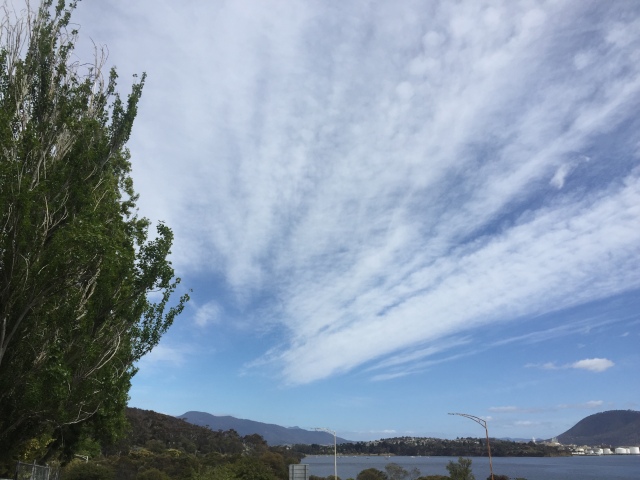 And walked past the Food Garden observing progress (and sometimes the devastating effect of recent winds) in some of the vegetable patches. 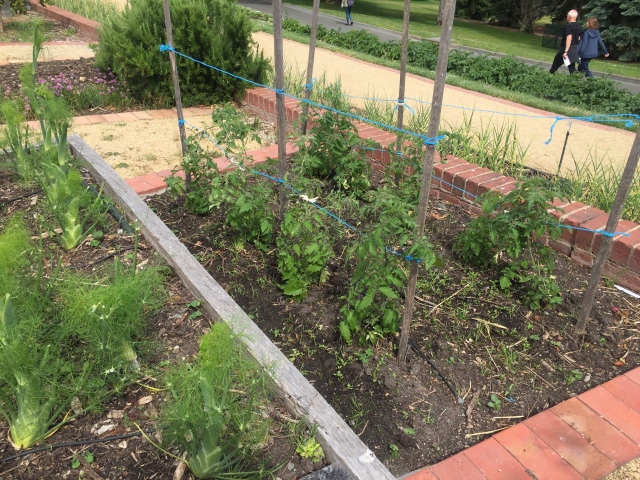 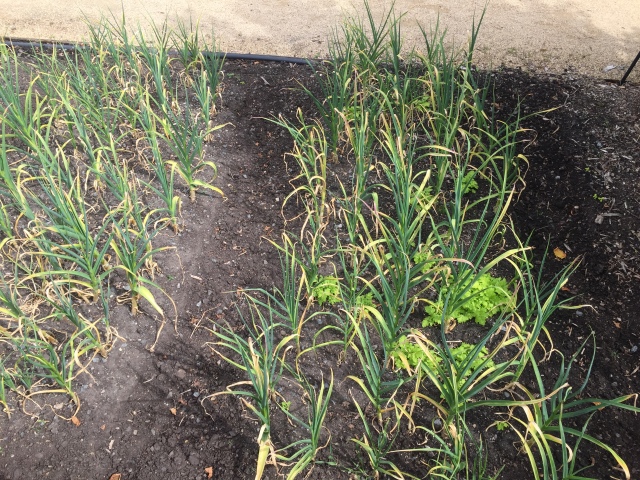 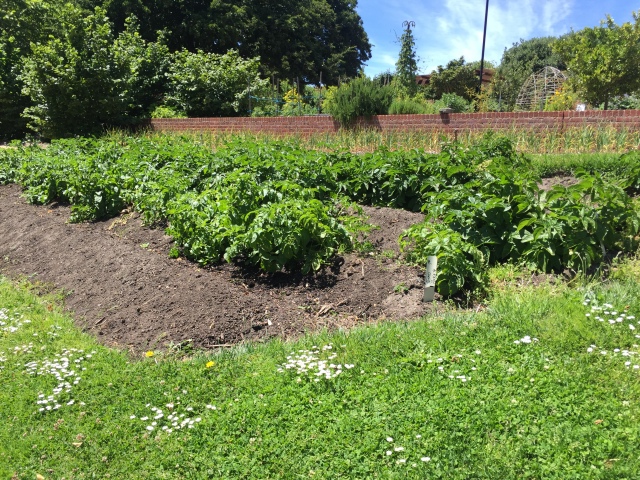 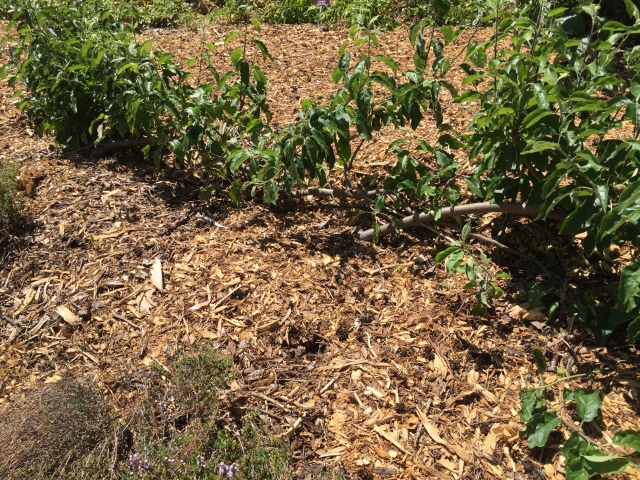 Then I walked on – onto my new and additional volunteering opportunity.

The new volunteer job is to help with seed harvesting in the Philotheca freyciana seed orchard in the RTBG nursery. This is a critically endangered plant endemic to Tasmania’s east coast and located in a very limited area on the Freycinet peninsula. Further information is available here; if you scroll down a little and click on Listing Statement, you will access a detailed pdf and can understand more extensively why this plant needs to have its seed collected.

Yesterday morning Lorraine, the Curator of the nursery collections met me and three others. We were introduced to reasons for hygiene protocols. In advance we had been given the following information: ‘In order to reduce the risk of any pathogens, ie particularly fungal diseases entering the Nursery facility, we are asking all visitors to adhere to the hygiene protocols we have put in place to mitigate against an incursion into our Nursery and Conservation Collections. The most important point is that you do not to bring any plant material with you into the Gardens. We would also ask that clothing/shoes need to have been laundered/cleaned thoroughly if worn recently in garden centres, interstate or up in the northern regions of Tasmania (particularly in regards to jackets and hats), any camera equipment has been cleaned/wiped down (including tripods, and equipment you use for your sketching/drawing.)’ A major consideration is that the plants being grown in the seed orchard usually grow slowly over years, are often difficult to germinate from seed or even to grow, and have a rarity which makes their existence in the seed orchard very precious. Should a disease or pest infiltrate, then years of hard work could be over in hours or days.

Then we were shown a number of different sets of plants in the seed orchard, shown where the sweeping equipment could be found, and shown where to deposit the seeds once collected – in a marked paper bag in the drying room. 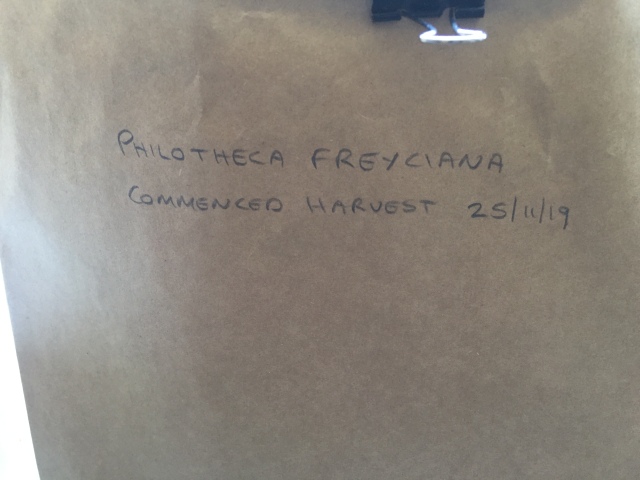 Finally we returned to the seed orchard to a raised nursery curtained off from the world. Inside were many pots of the Freycinet waxflower (Philotheca freyciana).The process for seed sweeping was demonstrated, two volunteers left and two of us remained to make a harvest. 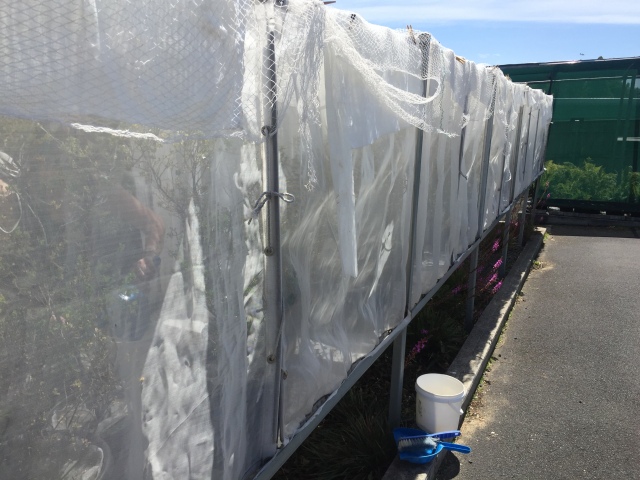 The screening is simply to prevent sparrows and other birds gobbling up the seed as it pops from the dried flowers. It was impressed upon us that when we opened each section to harvest the seeds, we should not walk away and leave the opening for any reason because the birds would fly in as soon as we left.

So the process of seed harvesting or seed collecting from this plant, is seed sweeping, and some handpicking. When two of us were at work, we opened each bay from both sides. Then we moved the pots to one end and began sweeping the tiny glossy slippery back seeds along with any leaf litter. Our job was not to sort the leaf litter from the seeds. 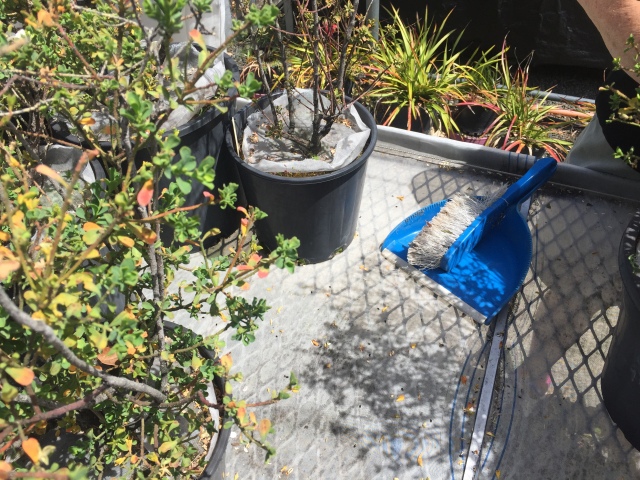 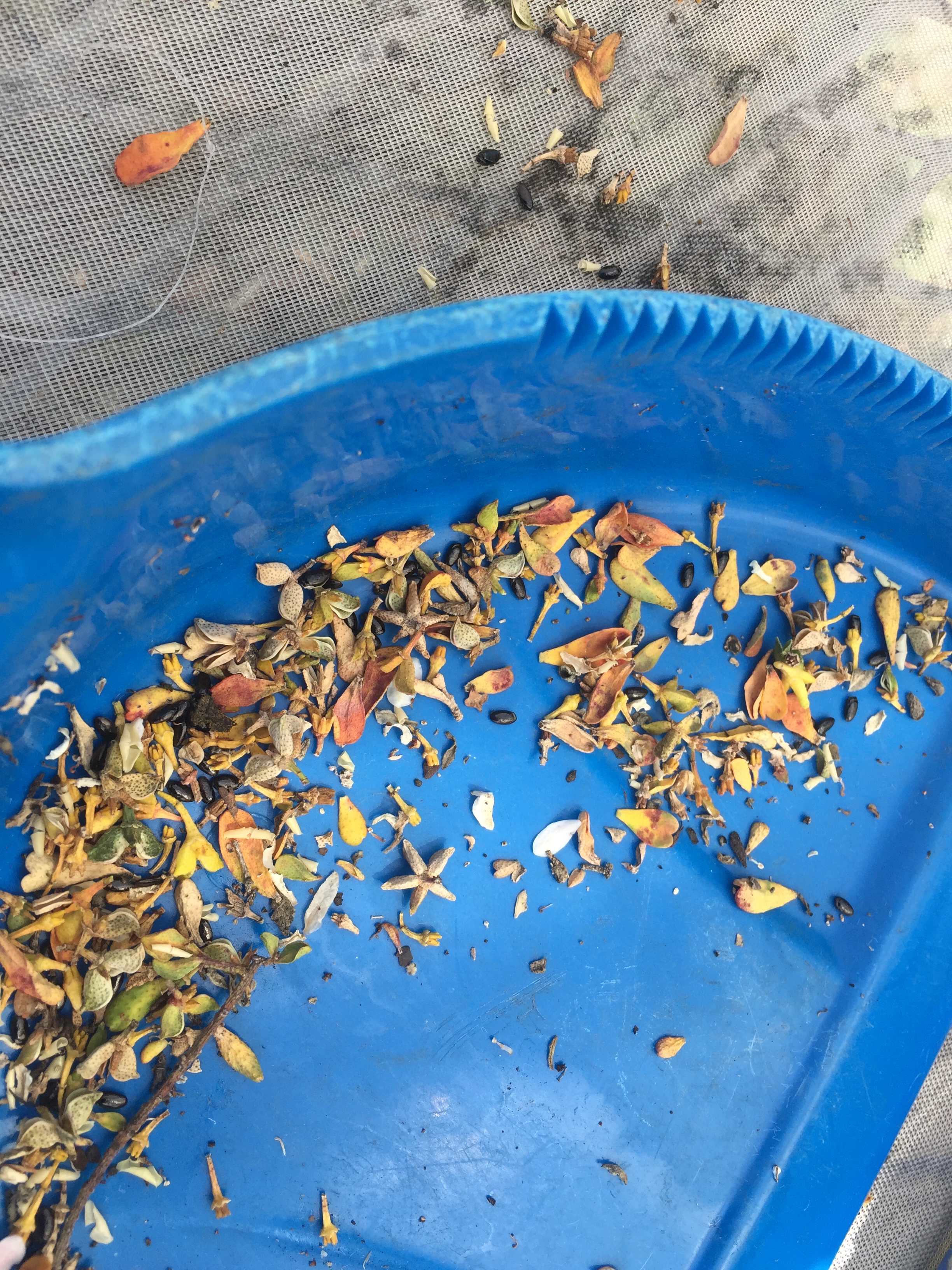 Our job was to sweep under the screening fabric and extract as many seeds as we could and load them into a bucket. 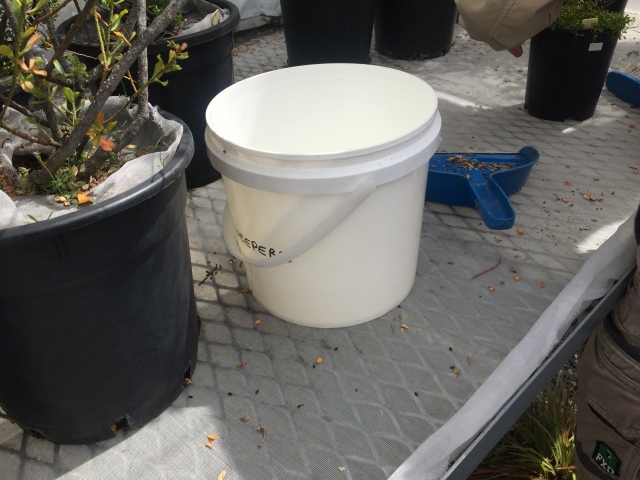 Each plant had a mesh cover across the soil and seeds dropped there. Our job was also to sift through the leaf litter and handpick these to add to the bucket. 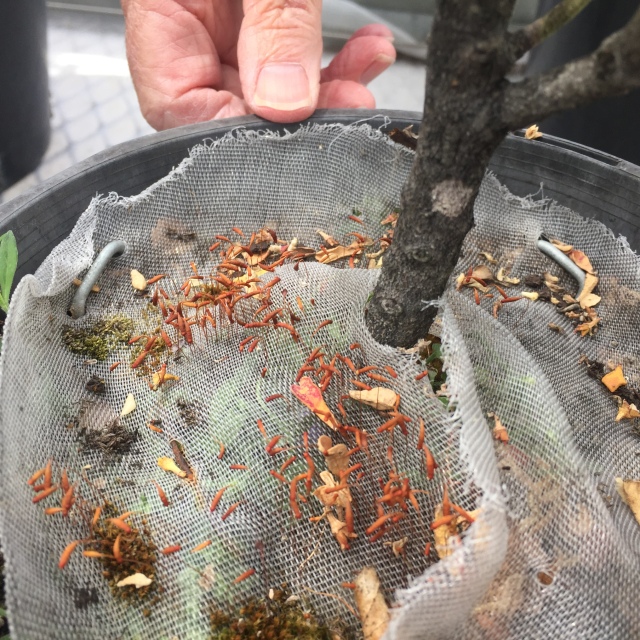 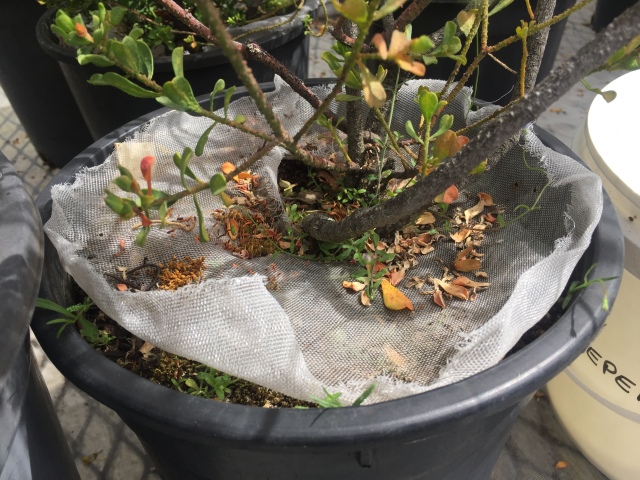 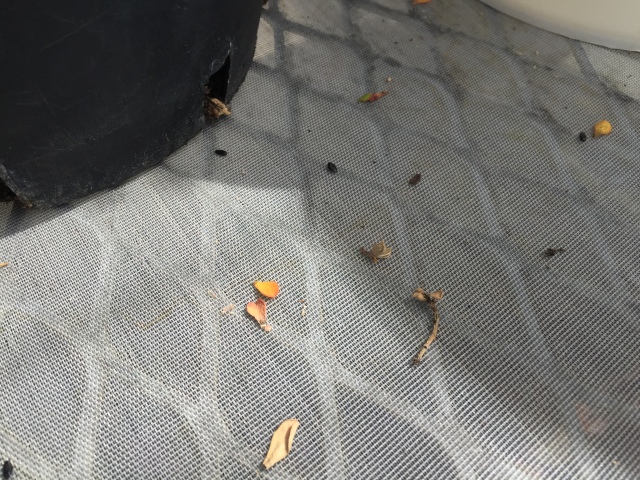 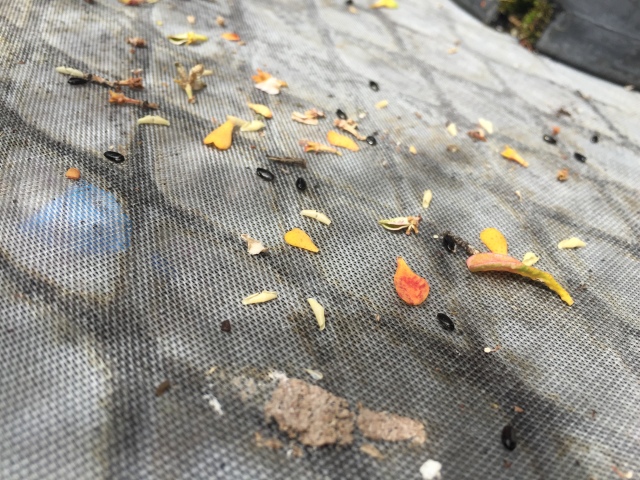 This was fiddly work. I didn’t want to snap off any of the seemingly fragile branches of the plants as I fossicked around and tried to pick up these seeds; having some fingernail length would be an advantage.

Once all the seeds were collected from the floor and the pots of each bay, the pots were moved back and the bay was sealed. Then we moved onto the next bay, and then the next etc. Not difficult but exacting work requiring care. 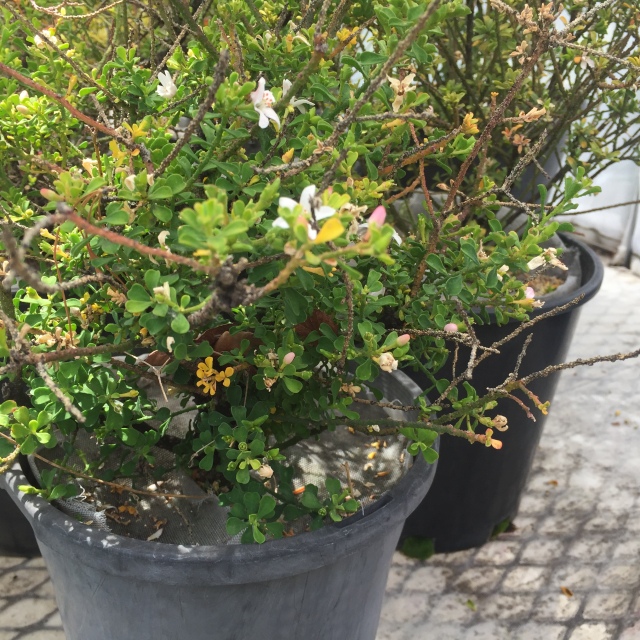 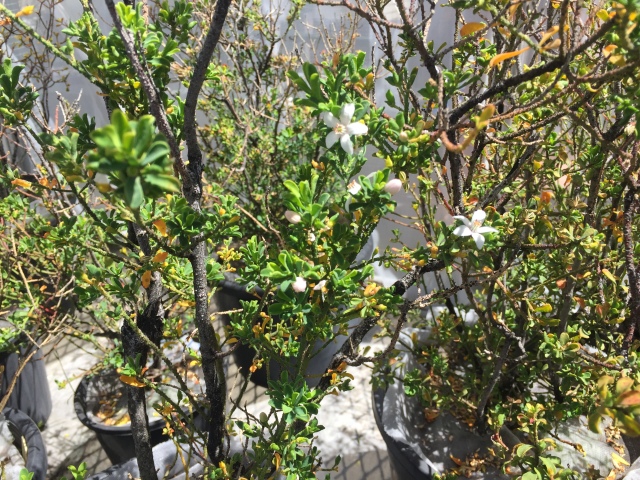 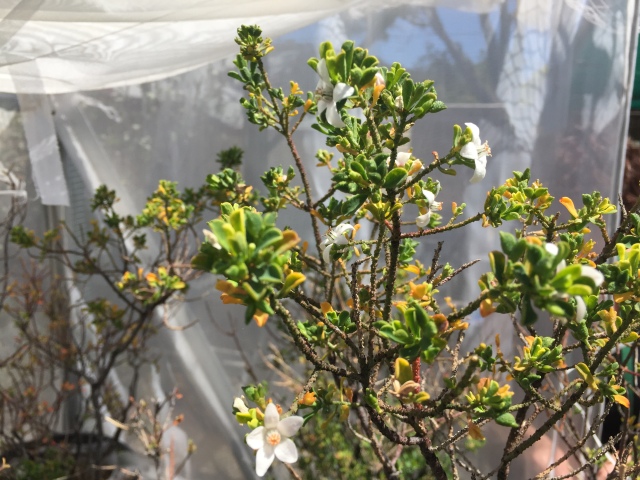 The most challenging part of this work was reconnecting the screens tightly so that birds would not get in. My fellow worker and I were particularly vigilant and we felt sure that we left this seed orchard secured from marauding birds. 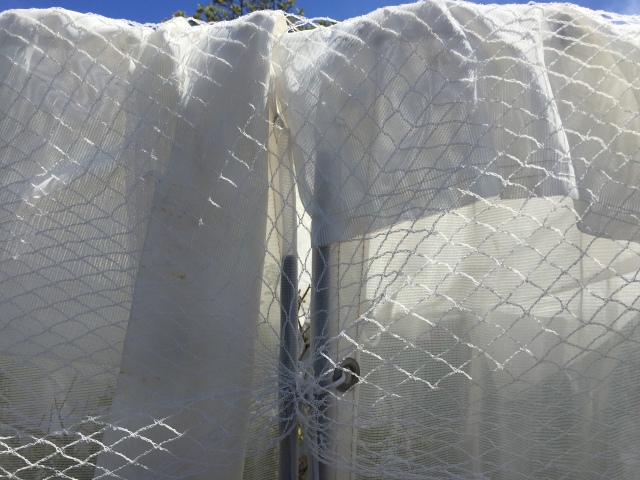 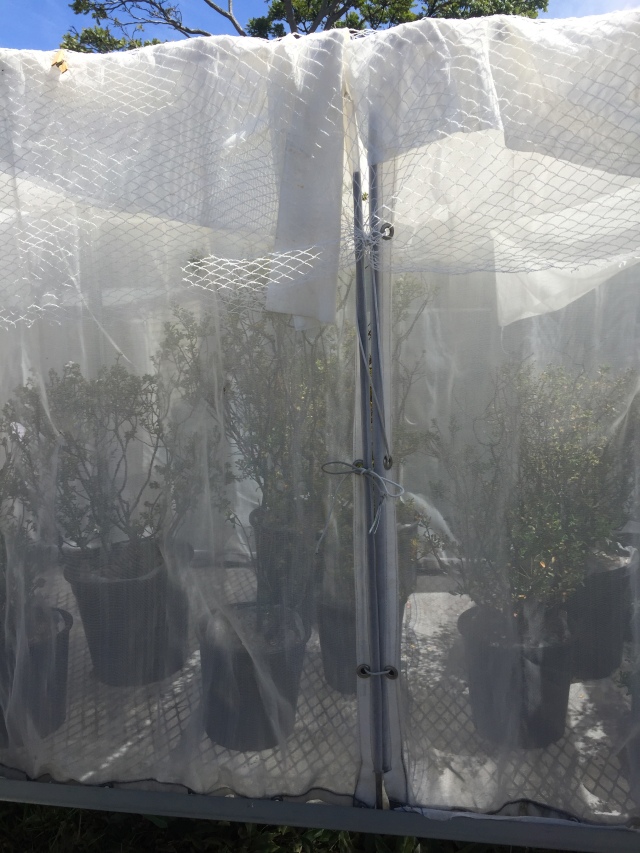 Then we took our buckets of seeds (and leaf litter), deposited them into the appropriate bag, then stored them in the drying room. 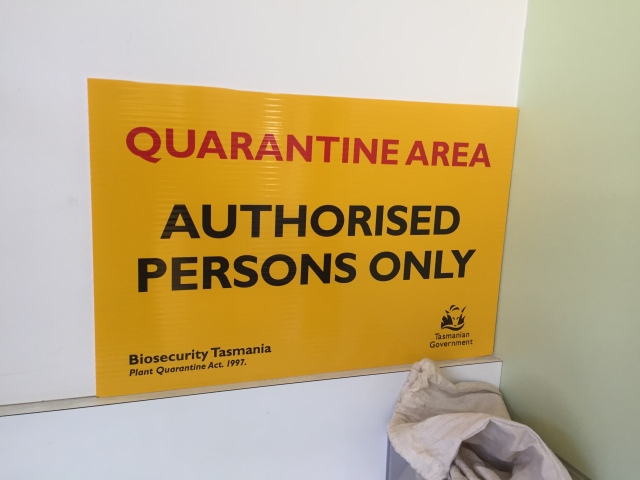 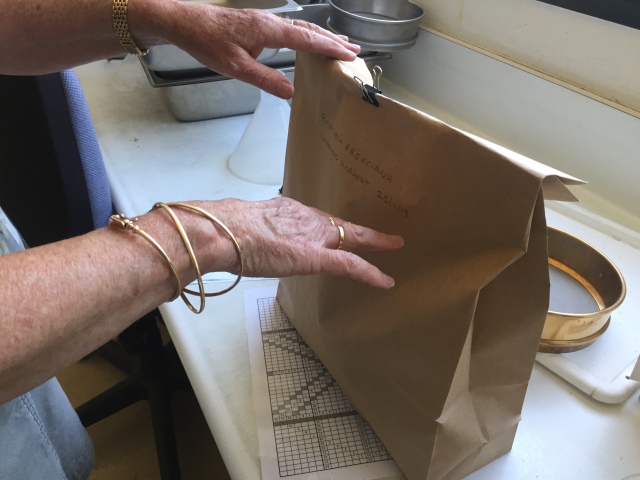 Once sufficiently dried the seeds will be separated from the leaf litter using scientifically created sieves. 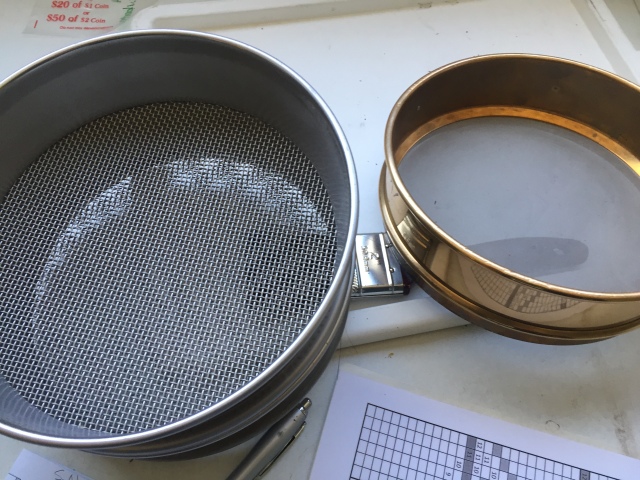 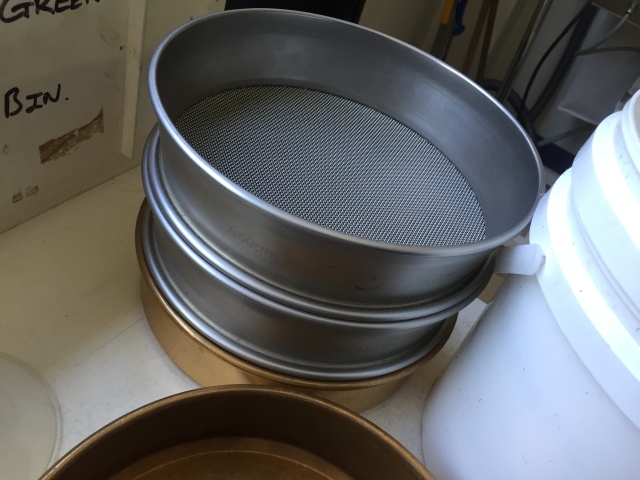 Finally, the seeds will be frozen within a particular ‘cold’ range for safe keeping.

Without a doubt this is a remarkable undertaking. A vitally important scientific process. In all, it forms one small part of the larger understanding of how our Earth works. The value of gathering such information and resources before mankind destroys the life in our environment cannot be underestimated. You can read more about the Tasmanian Seed Conservation Centre, housed in the RTBG, here.

A team of five of us have been rostered on Tuesdays and Thursdays for the next month. I look forward to each new experience – and then to recording what I did and how I felt about it.