Was I nettled? No

Posted on December 1, 2019 by Tasmanian Traveller

I was bound to collect weeds. I had a weed soup to make. Most of my fellow Food Garden volunteers were nervous about consuming weeds; ‘are they okay to eat’, was the frequent question.  And some are.  But which is edible we weren’t sure.  ‘There are some stinging nettles up the back’, Coordinator Adam said.  Ah yes. We had all heard that nettles when cooked can be eaten.  I felt relieved. That will be the perfect weed for us to eat.  Cooking neutralises the toxic components and the stinging mechanisms are lost.

Stinging nettles (Urtica dioica or urens) remind you they exist when you try to pull them out or are nipping a few leaf tips.  Yesterday I pulled all the scattered nettles, roots and all, hidden from public view behind a shed in the Food Garden of the Royal Tasmanian Botanical Gardens. I didn’t wear my gardening gloves and found the stems do not have stinging hairs. So when I went down to ground level to gently pull them by the stem, the process went smoothly and pleasantly. Only on the taller lanky plants did they make contact with my skin. As I loaded them into my plastic bag, sometimes the leaves swept across my arm or the upper side of my hand. They stung, but it wasn’t debilitating. Just a reminder to be slow and careful.

But a soup needs more than one ingredient. I collected a few left over pulled onions, a garlic was pulled for me, I collected a few young Sorrel leaves, and the flowering heads of chives.  I also collected another weed, the name of which I didn’t know, and about which I was unsure of its edibility.

Back at home I separated the produce and washed them.  Then I turned to the internet to find nettle soup recipes.  There were many and I soon realised that the soups usually either contain white rice or potato. I opted to use half a dozen of my medium-sized home grown potatoes (remembering Sunday’s lunch for the Food Garden’s volunteers was meant to include dishes by us containing produce from our own garden).  With a box of Campbells Vegetable Stock, and some fine cold-pressed Extra Virgin oil I was set to create a weed soup.

We know that the nettles are weeds in Tasmania but what about the other ingredients for my soup.

What about onions; were they ever weeds?  From archaeology has come the belief that onions originated in central Asia, were originally eaten from the wild and were eventually cultivated in Iran and West Pakistan.  Perhaps they still grow wild in some places but certainly we no longer consider them a weed, as distinct from the nasty onion weed.

What about garlic; was that ever a weed?  Doubtful. Garlic is thought to be a native of Central and South Asia or even southwestern Siberia . Its culinary and other uses seem to have spread to Egypt, Pakistan, India and China before the crusaders brought garlic back to Europe and the Spanish, French and Portuguese introduced garlic into the Americas.

Potatoes. Surely they are not weeds. The potato was first domesticated in the region of modern-day southern Peru and north western Bolivia between 8000 and 5000 BC. The potato does not seem to have been considered a weed but another quite different plant known as  Potato Weed is.

How about Sorrel; is that a weed? Sorrel is a weed that can cause severe yield reductions due to competition. It interferes with cultivation because the extensive root system blocks tyned machines; is spread by cultivation. It is a weed of crops, pastures, orchards, gardens, vineyards, vegetables, roadsides, wetlands, bushland, streams, granite outcrops and disturbed areas. Has a high oxalate content which may cause oxalate poisoning in stock. Breeding ewes are the most sensitive. Sorrel also has a very high vitamin C content, which was a reason it was used as a preventative measure by humans for scurvy. Not only is sorrel good to eat for humans, it also has medicinal properties.

The first starter ingredients; the garlic and the onions 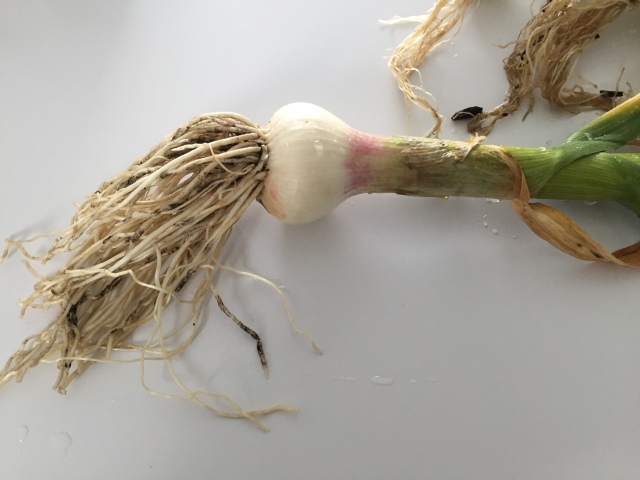 I chopped one onion and the delicately flavoured garlic finely and sweated them in a saucepan with olive oil. 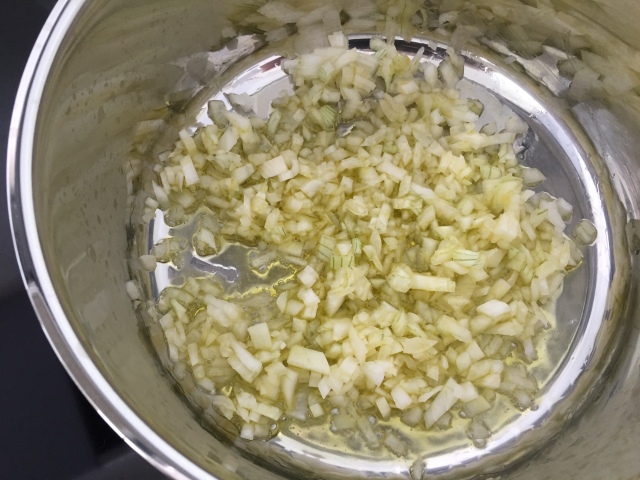 Then I cut the washed but unpeeled potatoes into small chunks, added them to the pan, and stirred the ingredients.

Time to add the vegetable stock; I poured in three quarters of a litre. 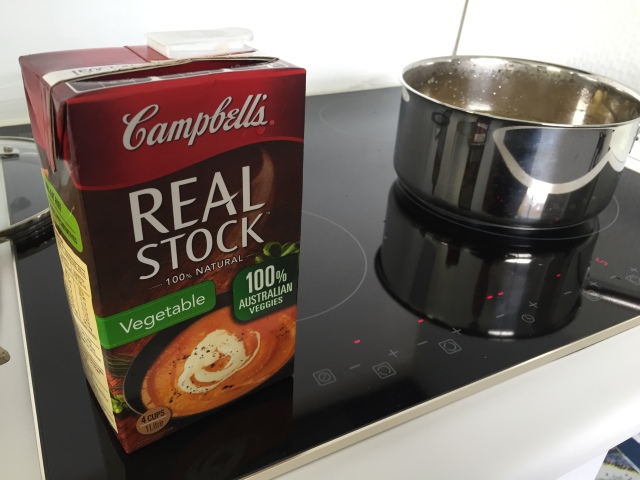 While waiting for that to boil and cook the potatoes, for the next ten or so minutes I painstakingly picked the fine leaves of the stinging nettle. With wet hands and washed wet nettles I was not stung. Interesting. Then I chopped the small pile roughly. So it changed from its initial seemingly large supply to a tiny mound. 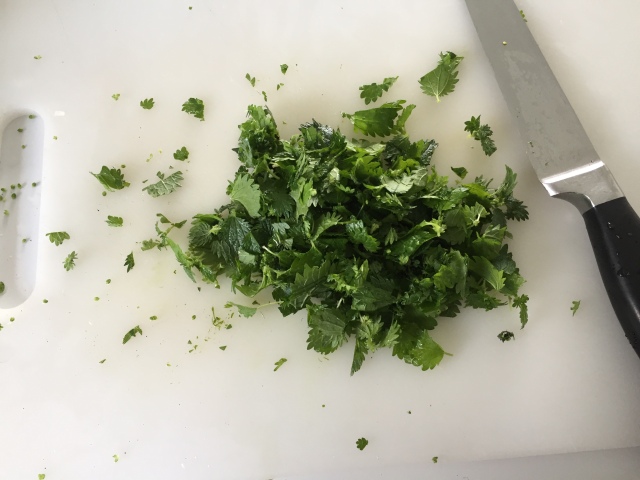 I turned off the heat from the saucepan and floated the pile of nettles on top. Then I grabbed the sorrel leaves, gave them a rough chop and added them on top of the soup. 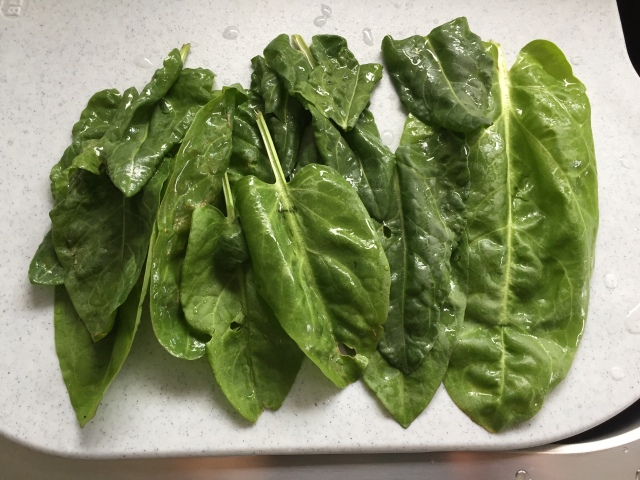 Then I realised I had wanted a green soup, but there was too little green material in the soup to give a clean colour.  Out I went into my garden and returned with three varieties of chard; the normal white stemmed silver beet, a red stem and a yellow stem. It was only fitting these join the soup pot because I had brought the plants home from the RTBG as discards that weren’t expected to amount to anything. Well perhaps their home here was kind and they have certainly grown, been beautiful to look at, and a joy to eat one or two leaves at a time. 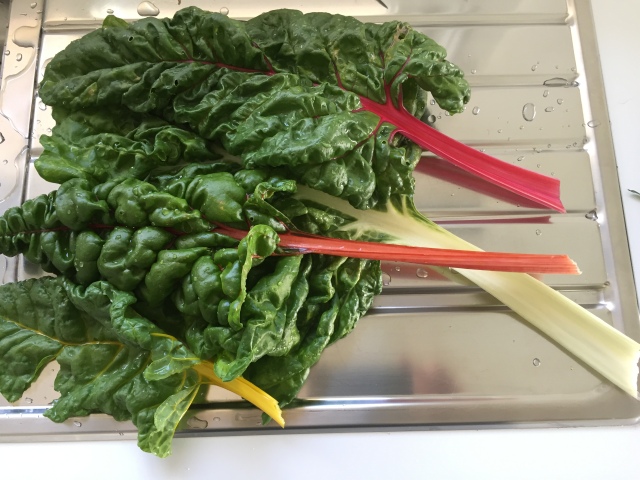 I turned the heat back on and let the new ingredients soften for a minute or so.  Then it was time to blend.  The result is a sensationally tasty green soup (and I haven’t keeled over yet so all ingredients must be safe).  In the following photo you can see a container ready to compost into the garden. In addition, you can observed that I did not use three of the four onions nor the unidentified weed – so fellow volunteers, you can relax and not imagine I have snuck in something you do not know about.

Last but not least, I have cleaned and washed the chive flowering heads ready to garnish the soup. 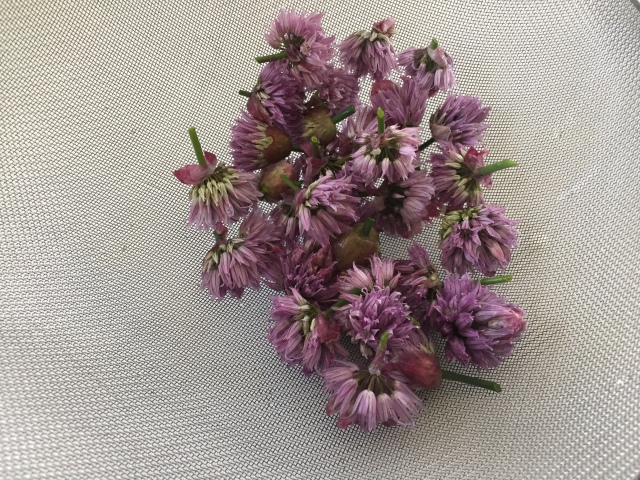 Now all we need is the taste test by others.  I say it is terrific but what will others say later today when they have their ‘shot’.

2 Responses to Was I nettled? No