Posted on September 22, 2019 by Tasmanian Traveller

Again I was given a lift to the Royal Tasmanian Botanical Gardens (RTBG) by a fellow volunteer. Of course we enthused about gardens and plants all the way. Both of us had completed the University of Tasmania’s free online Science of Gardening 1 course only a few days previously. We were chuffed. We had learnt so much. We were freely and comfortably using specific words which had previously not been in our vocabulary; and we felt all the richer for that experience and for the many enlightenments along the way. Science of Gardening 2 starts in a few weeks and we are eagle eyed with excitement about what new learnings will be made.

It seemed that only moments passed and we were entering the RTBG, walking down past the glorious tulips (refer last week’s blog post) and arriving at the Community Food Garden. Need I say – but yes ,of course I must – the sky was blue without the slightest of white dots or veils. The sun spectacularly brightened the landscape. It was Thursday and – as blog readers know – it is always a gorgeous day on Thursdays when we are volunteering in the Food Garden. Only two women seemed to be present – foraging for vegetables to supply the charity, Second Bite. We remarked that it was unusual for N and B not to be in sight. It never mattered how early I arrived they were always there ahead of me and hard at work. ‘Oh yes’, we were told, ‘ they are around the side digging’.

During the past week the Coordinator of the Food Garden, Adam, had organised for a massive plane of concrete to be cut and removed. Many truck loads later the gravelly surface beneath was exposed. ‘What’s going on here?’ Obviously changes were in progress. That very large rather unpleasantly concreted area which didn’t invite much lingering was in the process of a substantial facelift. In place of the concrete will be an expanse of lush grassy lawn with a few shade trees and visitor seating. This area is backed by one of the convict built red brick walls which surround much of the RTBG. The effect is to moderate the temperature and generally keep the air warmer nearby. It also acts as a windbreak so that the new space will be very comfortable on cooler sunny winter days. I have no doubt that sun trap will be much used in the future. But what does that all have to do with the present.

On arrival I could see N down on his hands and knees excavating gravel and old soil from around the storm water pipe and the other drainage pipes which intersected it. A painstaking, almost difficult job similar to the work of archaeologists on a dig. Just as they don’t want to break artefacts, the goal here was to uncover the pipes and keep them intact until they could be cut off and sealed. 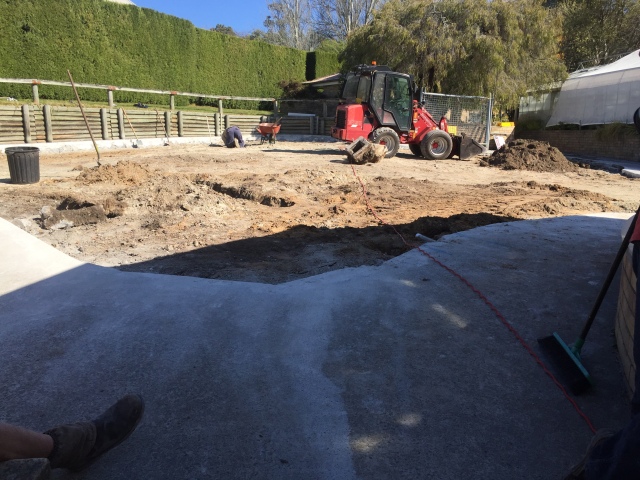 Adam explained the options. We could help with the digging or we could go weeding. I shuffled physically and mentally. I could see staying to help in this area required hard labour. I didn’t want to help create the situation where the male volunteers did the heavy work and the women took less taxing options. I didn’t want to help to create a divide. But common sense prevailed. I knew I was arriving at the RTBG with low energy levels and decided weeding would be preferable for me. And, as it turned out, all the other female volunteers chose weeding. We looked at green all day. The men at dusty browns and greys. 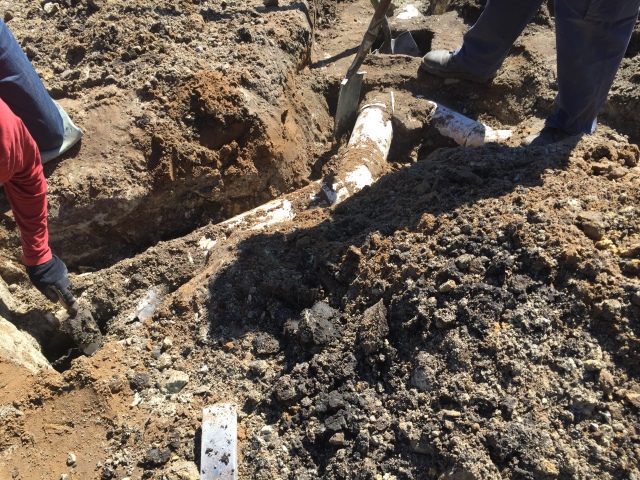 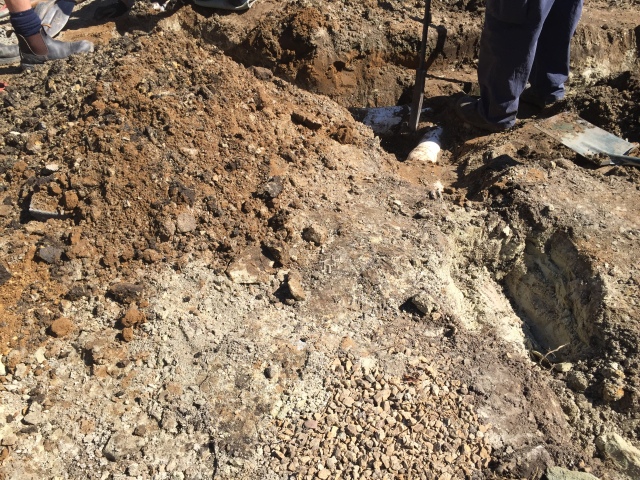 First up, my job with another was to clear the grassy weeds poking through the straw mulch near the tea bushes. We are all excited because next week, if we are lucky, we will  pick the tips of the specific camellia bushes ready to make tea. 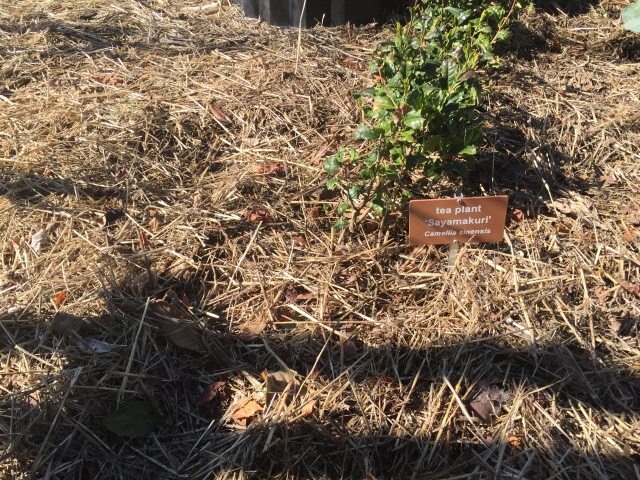 Later Adam introduced me to a patch beneath some fruit trees that he declared needed a good weed. At first glance the ground was covered in a carpet of a green creeping herb. However it was the lurking clever weeds that lurked within that needed to be discovered and removed. Last week I had locked into memory the name of a clever potentially invasive weed – the Medicago. This week a new weed, one which thankfully does not grow in my home garden, was revealed. It was as sneaky as the Medicago. This one was Vetch. 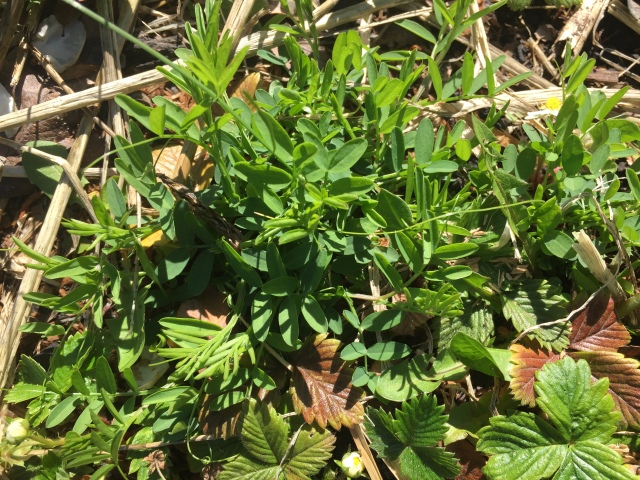 You can read more about this weed here.  Meticulous vigilance was required to see most of the Vetch plants and then remove its roots and all. I liked the process when I found a ‘nursery’ of plants hiding beneath a spread of green herbs. These seedlings had tiny weak roots and could be pulled easily. As usual I don’t wear gloves for this fine work: I can feel and loosen each plant and remove everything including the roots. Very satisfying. 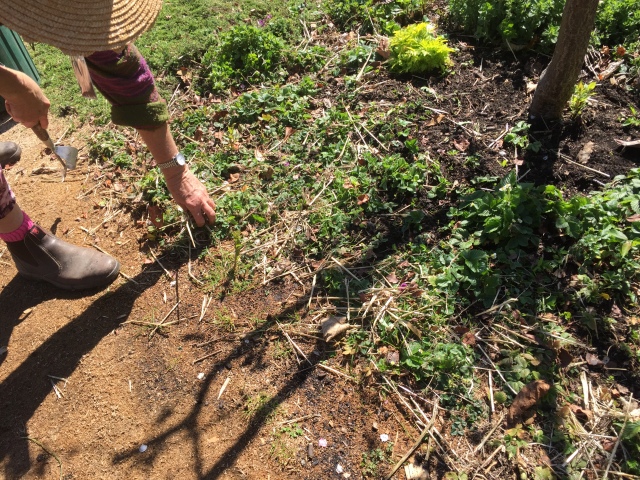 We were a great team, working away happily and sharing our learnings. Happily answering visitor questions and learning from them on occasion. Lunch time arrived quickly and, as usual, we commandeered stone walls, upturned rubbish bins and seats for resting while we munched away in the glorious sun. One magpie called by to check us out. I am not a believer in God but I perfectly understand the lines from a Robert Browning poem ‘God’s in his heaven’ as an indication ‘all is right with the world’.

More weeding by the female volunteers continued on the same patch after lunch, and the men went back to excavating. Later, when the pipes were capped, the holes needed to be filled. 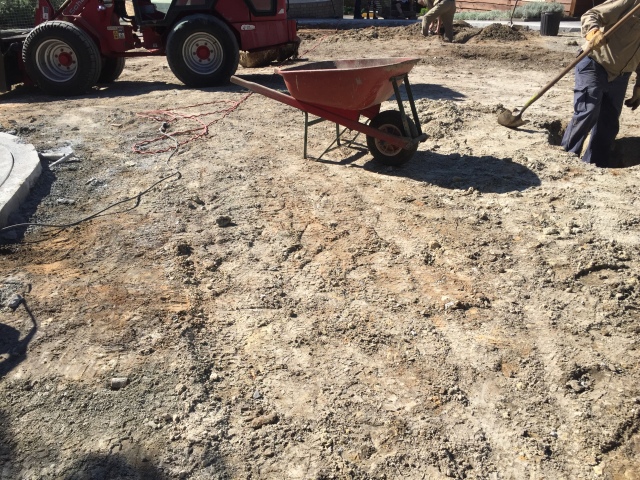 I can only hope they soaked in Radox filled bathtubs that evening to soften their worked back muscles.

I finished the afternoon by returning to the marjoram patch and lifting out most of the runners and plantlettes (not a technical term) of the Medicago which we had not had time to tackle during the previous week. I was able to show a couple of others these weeds with one remarking ‘heavens you need good eyesight to see them’. Another helped remove the last of this weed . As I type this blog post, I know it won’t be the last to grow. Such invasive clever plants, albeit weeds, never disappear totally so I realise that I will be able to revisit that area with the Medicago as well as the patch with the Vetch from time to time and find weeding work there. As we cleaned/cleared the herb patches of seemingly invisible lurking weeds, I realise that it is unlikely others would notice the change. However, if we had let the weeds grow even one more week in this warming Spring weather, then the weed removal would be much more time consuming.

Our efforts are much appreciated by Adam and by the many visitors who comment on how lovely the gardens look. In addition I know I am in awe of the persistence and devotion of my fellow volunteers. They inspire me.

One has named me ‘weed girl’. I quite like that. Smacks of simplicity and unpretentiousness. All I know is that working in the Food Garden of the RTBG gives me a feeling of free breathing while I feel connected to the earth in a profound way. Ah, the joy!