I have never eaten nor made cumquat jam.  While I was at the Royal Tasmanian Botanical Gardens (RTBG) I was told that the skin of these tiny citrus fruits contains the sweetness not the fruit. Intriguing.  Another volunteer had made a pot of very tasty jam from last week’s pickings and I was inspired. Hundreds of the fruit were on offer so, as I left the Gardens, I took just a few – over three quarters of a kilo of cumquats. This didn’t make a dent in the large volume picked.

First I cut off the stalks. 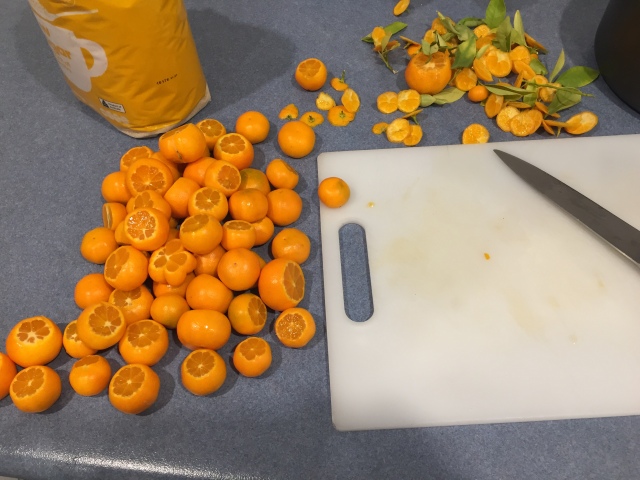 Then I quartered each and removed the pips.

Recipes indicate the pips should be kept, held in a muslin bag and then immersed in the pot while the fruit boils.  I didn’t do this – I didn’t have a muslin bag (you may remember my muslin bag is holding the salted olives downstairs) and I hoped that the fruit and its peel would contain sufficient pectin for the jam to set.

The fruit went into the pot.

I added almost a kilo of raw sugar and brought the mixture to the boil.  I occurred to me that a lemon might provide pectin so I picked one from my new Meyer Lemon tree, cut it in half and immersed it into the pot of cooking cumquats.

When the jam had almost reached setting point, I removed the lemon pieces,  blended the mixture, then reheated and simmered the liquid for a short while until the jam had reached setting point.  Tasty.  Very sweet in comparison to my recent production of bitter orange and grapefruit marmalade.  Since I seldom eat sweet foods I cannot judge whether this is too sweet so I am waiting for neighbours to pop in and taste and give their verdict.

That quantity of cumquats made 4 and a half small jars of jam. 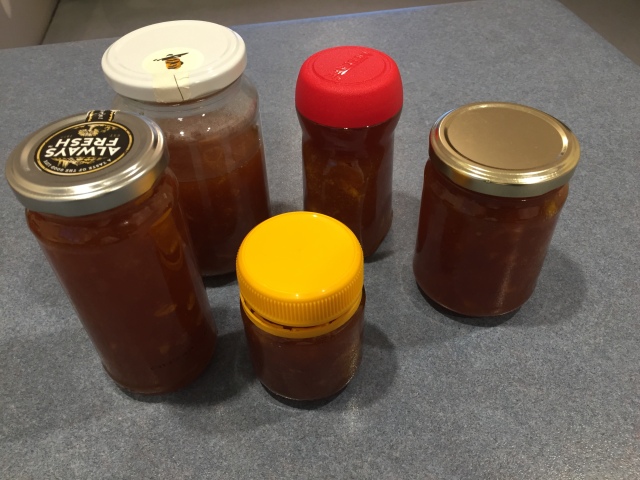 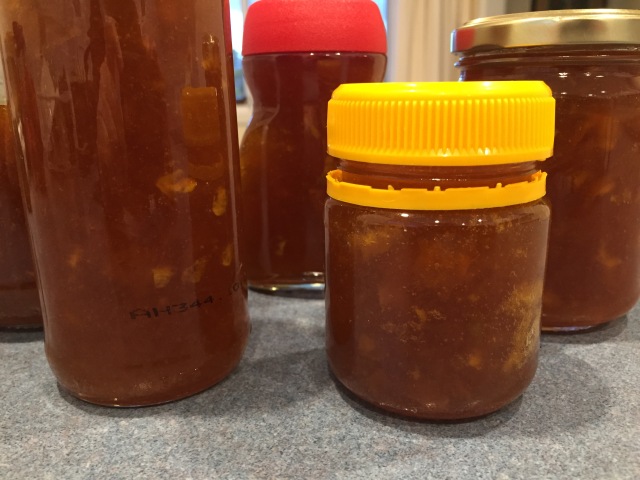 This cumquat jam glows with something of its natural original colours. Beautiful. I will definitely take a few pots to give to fellow RTBG volunteers next week; to share the bounty of our harvests.