Yesterday I was fortunate to be offered some oranges and grapefruit that had been ground-fall in the Food Garden of the Royal Tasmanian Botanical Gardens (RTBG).  I brought home some to make marmalade jam.

I remember my grandmother’s marmalade as very sharp on my childhood taste buds. It was a characteristic that took some time for me to learn to enjoy. Once I became accustomed to the flavour, it took me on a path towards enjoying bitterness in food. It is years since I have eaten home-made marmalade and now, as an adult, I am not sure how tart or biting the jam should be in this age of sugar packed products.

The pectin needed to set the jam is in the pith and peel so I peeled off the skins, kept some and discarded most before deseeding the fruit and shopping into small pieces. 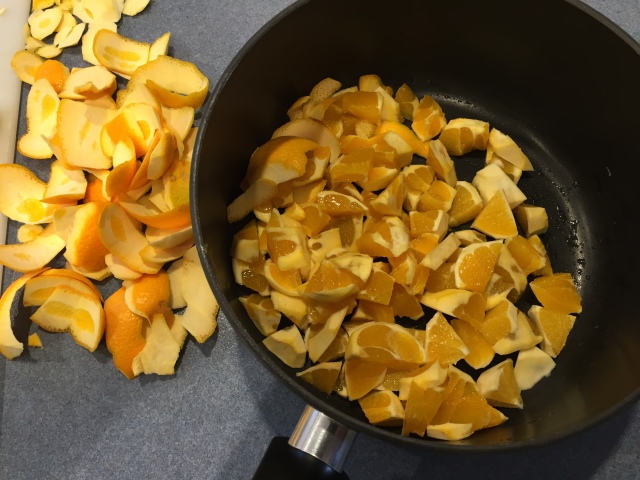 Once the fruit was in the pot, I added a few thin peels of orange to help the setting. Then I poured in over a kilo of raw sugar. Oranges are typically sweeter than Grapefruit and the majority of the fruit being used was Grapefruit so lots of sugar seemed essential. The amount was difficult to gauge because I don’t add sugar to my cooking normally.  I simply hoped the marmalade would be sufficiently sweet with ‘all that sugar’!

After boiling the mixture until the liquid reduced and the marmalade was able to set, I filled 5 jars and a small bowl with home-made marmalade.  The jam was a joy to behold; a warm rich colour. 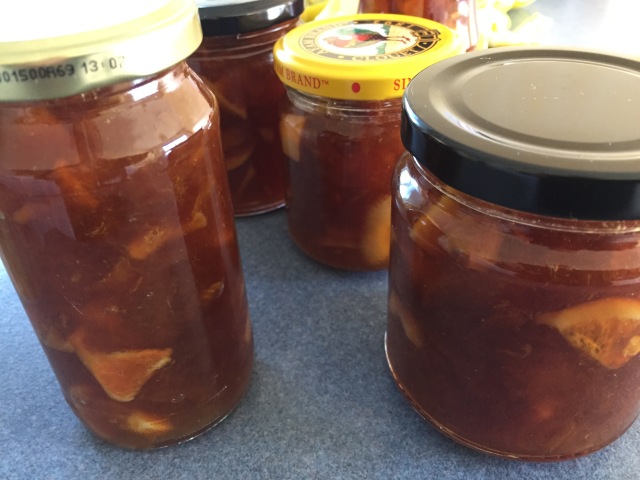 What is the flavour in my new jam jars?  Definitely citrus. How can I describe its character? There is a sense that my marmalade seems unsweetened but we know I added over a kilo of sugar during the jam making. The sense of apparent lack of sugar comes only after enjoying a teaspoonful and swallowing; then moments later the bitter notes arrive and swirl around the mouth. On this basis I am not sure anybody else will like what I have cooked. I can visualise bodies recoiling when the strong aftertaste arrives. Now I am reluctant to give a pot to Adam. Perhaps next Thursday I will take the smallest jar and small spoons and let everyone have a taste. If the reaction is positive, I know I have more jars waiting to share.