Co-ordinator of the Community Food Garden in the Royal Tasmanian Botanical Gardens (RTBG), Adam, explained that disposing of the Red Cherry Guava fruits usefully wasn’t easy. They are tiny and heavily seeded and are not necessarily palatable for every person’s taste. He would take some to the RTBG restaurant for the chefs to experiment with but there were hundreds more. 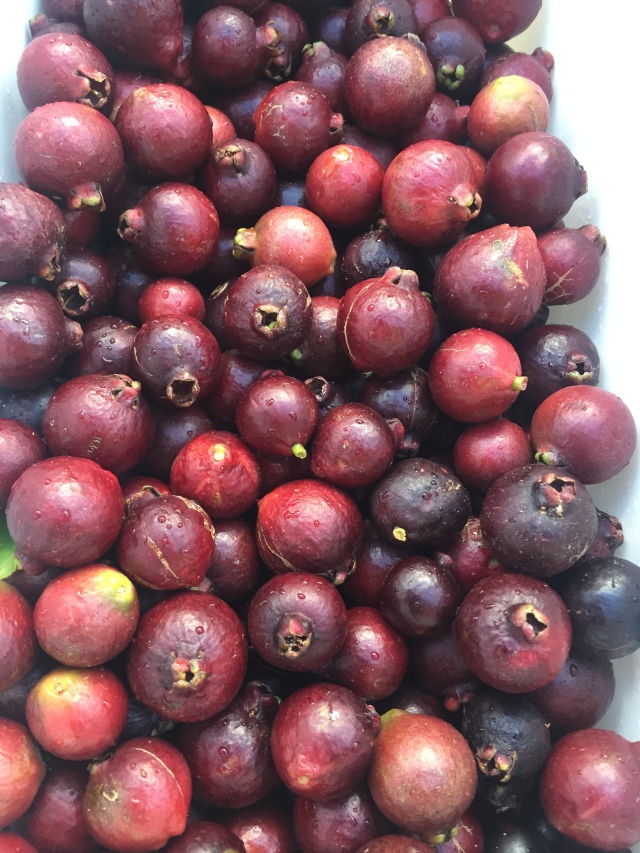 Would we like to take some home and turn them into Jelly, Jam, or Sorbets?  My small backpack was filled with an empty lunch box, thermos, additional odds and sods, plus my gardening shoes. It was tight in there. But I could see gaps.  I poured a tray of the Red Cherry Guava into those crevices and determined not to squash my pack as I returned home.

At home I decided to attempt to make a natural jelly.

First I washed the fruit.

Each fruit has a small hard ‘crown’ – undoubtedly this has a correct name – which I methodically sliced off.

I poured the fruit into a large saucepan on the cooktop, and set the temperature for low. I didn’t add water or sugar or any other substance.  The temperature gradually rose over the next 15 or so minutes until, with some occasional stirring, liquid began to form. On that same low temperature I let the fruit come to the boil and then simmer for another half an hour or more.

With the understanding that the addition of powdered citric acid acts as a useful preservative and is typically used when making jams and jellies, I reached into the cupboard and grabbed a container, added a little to the pot, and stirred. When replacing the container in the cupboard I reread the title. I had added Tartaric Acid!  This product functions as a raising agent with baking powder, but it can help set gels so I felt encouraged.

I tasted the mix.  Slightly tart but not in a screw-up-your-face sort of way.  Pleasant enough but could do with some sweetening.  I don’t normally add sugar when I cook so in the cupboard was only a tiny portion of caster sugar which I stirred into the fruit. In addition, I found a stoppered glass container of long unused icing sugar. Using this with the fruit seemed like a good idea so I stirred a little into the pot.

I strained off the juice, scraping the now mushy fruit backwards and forwards across a sieve.  Discarded the fruit remains into the compost bin, and marvelled at the deep rich red colour of the juice which I expected to turn into jelly. I poured the liquid into containers, cooled it down, realised it was as liquid as ever, and popped the containers into the fridge hoping for a miracle.

I tried to stay in a state of denial but deep down, I was beginning to realise that freshly made Red Cherry Guava jelly was not waiting in the fridge.  Alas.

What to do?  All those fruits. All that effort.  Can’t be wasted.  Having despatched the fruit carcasses to the garden I didn’t have the ingredients for a jam or a Sorbet. Instead I hit on the idea of making a Granita.  How difficult would that be?  Surely, a cinch?

I transferred the rich juice into a bowl ready to start setting in the freezer.  One photo below includes an avocado – this is used to indicate the quantity of juice remaining from the large bowl of Red Cherry Guavas with which I started the process.

Into the freezer went the bowl of juice. Google research indicated that after about 2 hours the edges would begin to turn icy and that was the time to scrape with a fork to lift the crystals. Dutifully I tried. The texture was now akin to a firming jam. There were no icy crystals.

I returned the bowl to the freezer and tested at various hours without success then went to bed.

The morning test offered no joy. Granita would not be on the menu. 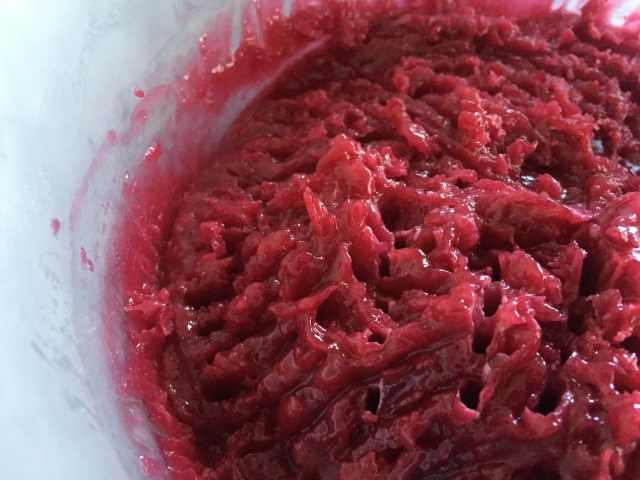 However, I now have a ‘frozen’ consistency of a very dense, sticky amalgam.  This mixture is incredibly palatable. It is not as firm as hard icecream, but it is firm and doesnt droop or flow.  I think that if I ate icecream, a couple of spoonfuls would make a truly delightful flavoured topping.

Despite these trials, the ‘whatever it is that I have in the freezer’ will not be wasted.  Shall I call it Helen’s Red Cherry Guava Edible Glue? A small bowl will be my desert for a few nights to come.  Ah –Bon appetit!

I can now say that despite not having plate appeal, the rich coloured cold ‘glue’ was soooo tasty.