Posted on February 3, 2019 by Tasmanian Traveller

Prior to our visit, the FOTI volunteers had prepared the way for the influx of visitors.  The tracks and areas on which we were permitted to walk had been mown, and we were instructed not to deviate from these. Tasman Island is a conservation site and everything is being done to protect its environment. Before we boarded the helicopter earlier in the day we went through an intensive process of cleaning our gear and scrubbing our boots so that we didn’t bring seeds or damaging soils onto the island.  But just in case we did bring some undesirable item, staying on the path was deemed one important means to protect the rest of the landscape. Of course weeds have been grown from airborne seeds or from the poop of birds. However FOTI have an active weed management process underway which requires constant maintenance.

I headed off along the track which finished opposite the Tasman Peninsula and the pronounced Cape Pillar Under a glorious sun I looked for and loved the pink mountain berries (probably Leptecophylla parvifolia) which flourished along the way. 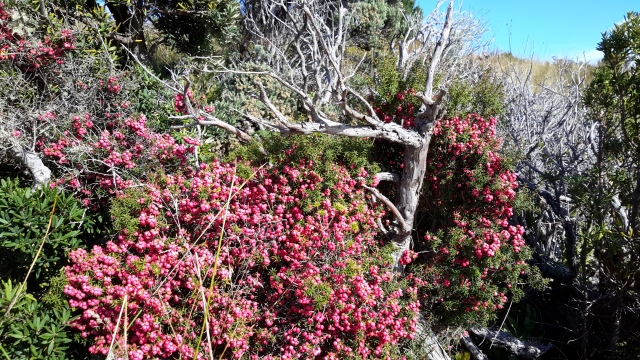 There were many native pepper bushes (Tasmannia lanceolata) dotted through the vegetation.

Other plants included the following: 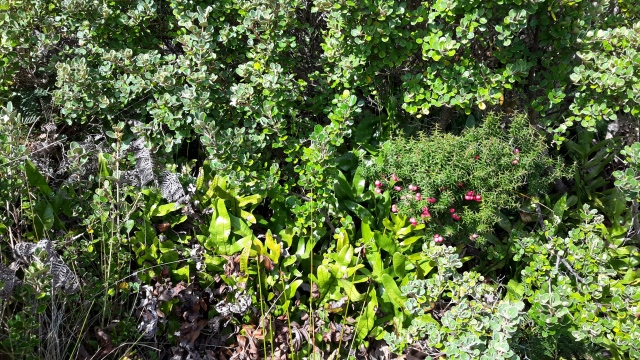 Then I looked up to see a seemingly transparent moon almost obliterated by the intense blue of the day’s sky.