Posted on January 30, 2019 by Tasmanian Traveller 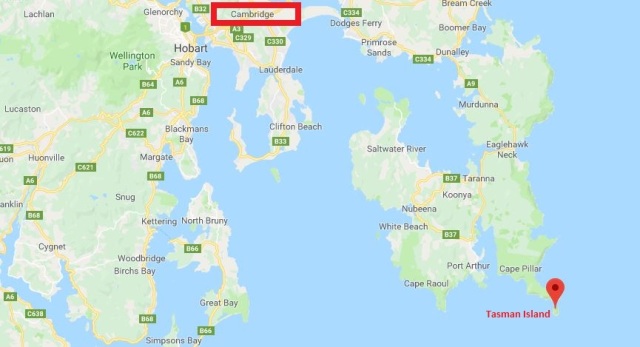 When I arrived at the small Cambridge airport near Hobart on the 7th April 2018 not long after sun up,  I was the first of my group of five to arrive so I sat and listened to the pre-flight briefing, safety procedures and ‘training’ being undertaken by the first group of flyers. We were the privileged few who were going to have a full day on Tasman Island. A hundred or so other people were able to fly a shorter distance from near Tasman Island later in the day, but each helicopter ’s group only had 2 hours on the island. 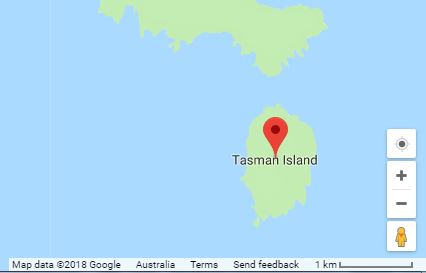 Here is my group.  That’s me centre front. 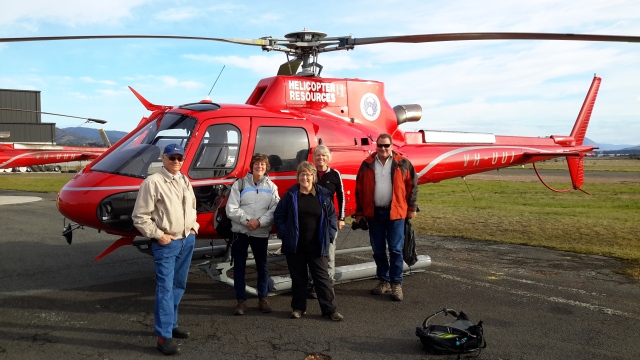 I sat in the back behind the pilot. Everyone had their cameras ready.

If you can bear the noise of the helicopter, then enjoy our take-off in this video. See the Barilla Bay Oysters in the farmed rows.  Watch as we fly past the main Hobart airport.

Soon we were swinging across the land near the airport, over the water of Tiger Head Bay and heading south east towards the Tasman Peninsula (on which Port Arthur is situated). 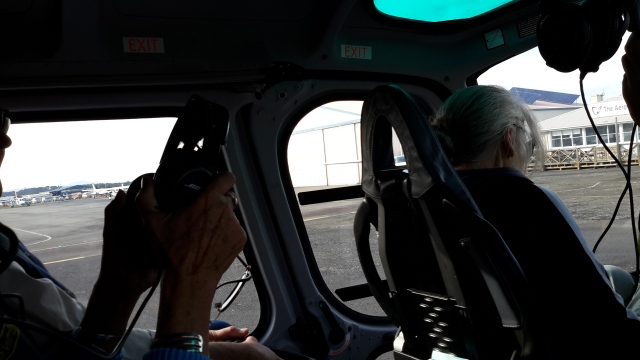 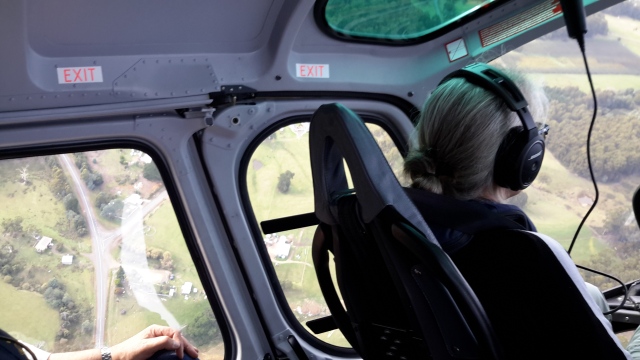 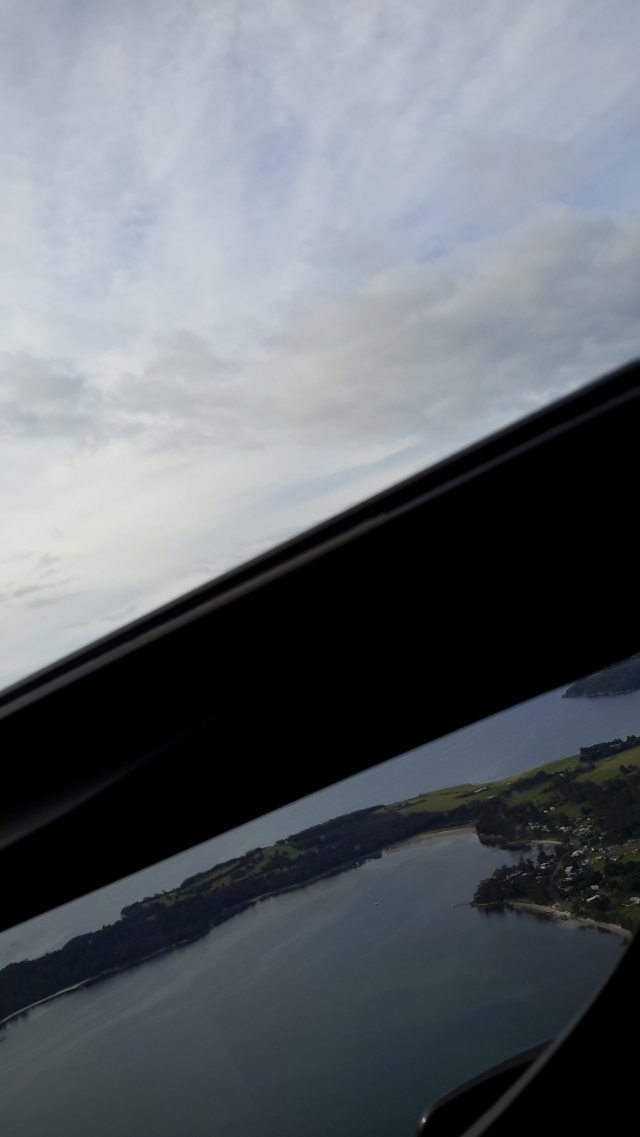 Before long I could see the Port Arthur penitentiary and other buildings below. 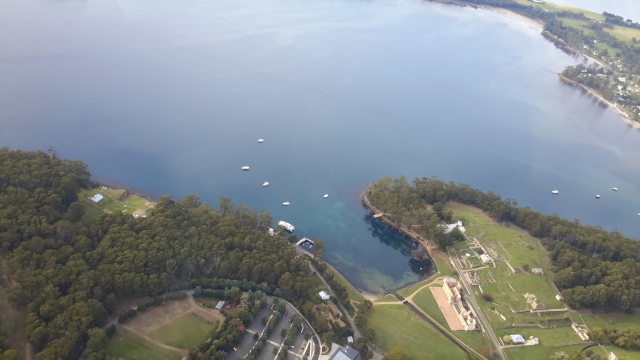 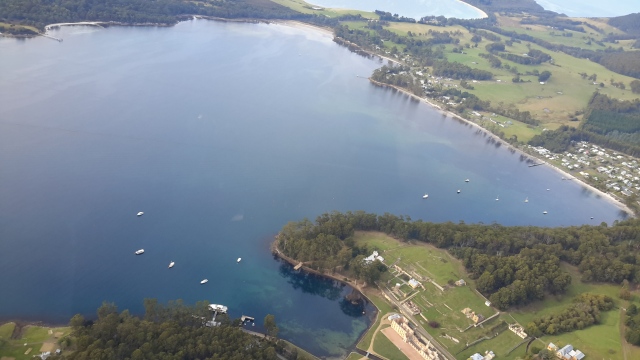 Then, in the distance past where the Tasman Peninsula stops we could see the flat top of Tasman Island.  Within moments, more of the island became visible.  Enjoy looking out the windows and seeing the landscape. 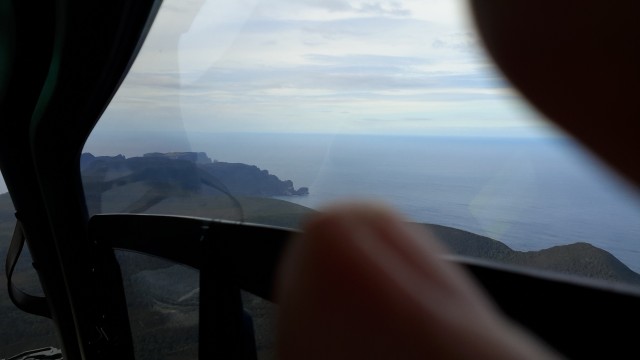 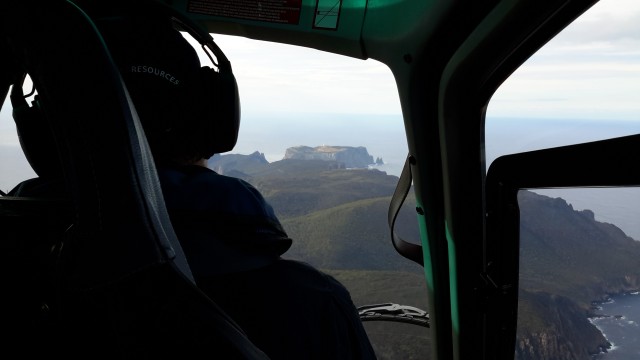 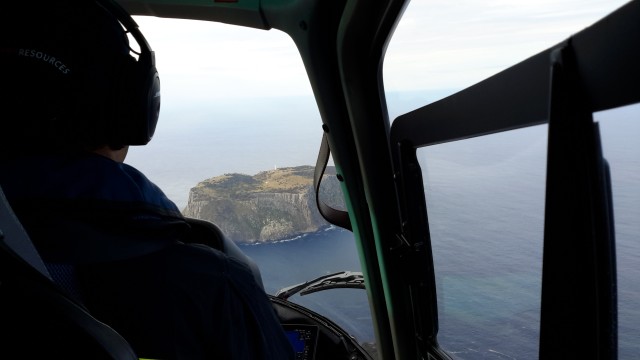 Then we reached Tasman Island and flew around the southern end. 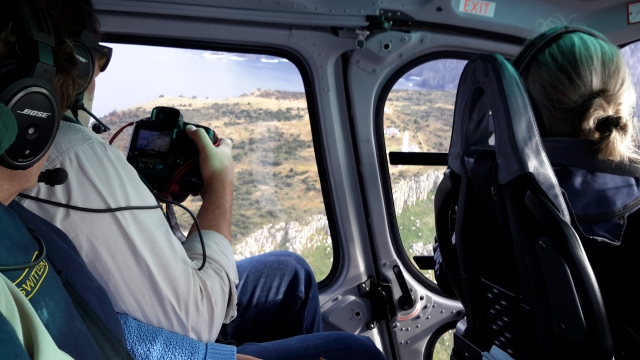 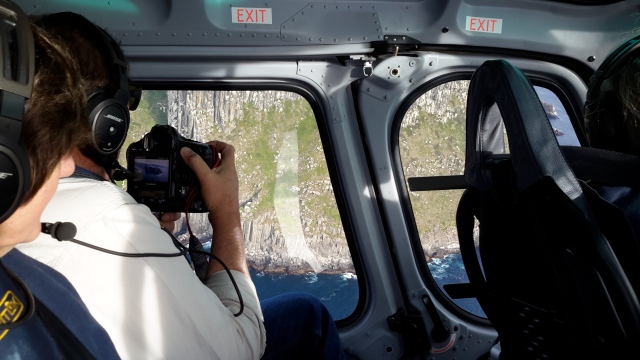 The lighthouse came into view. 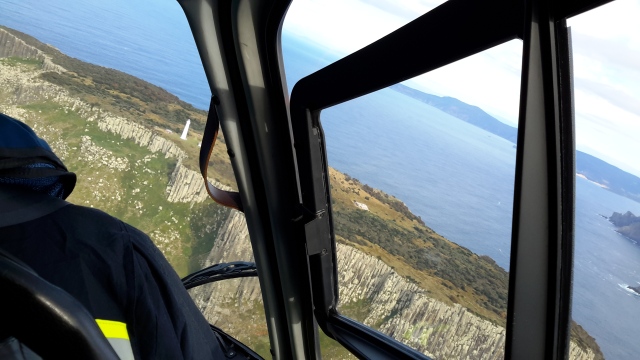 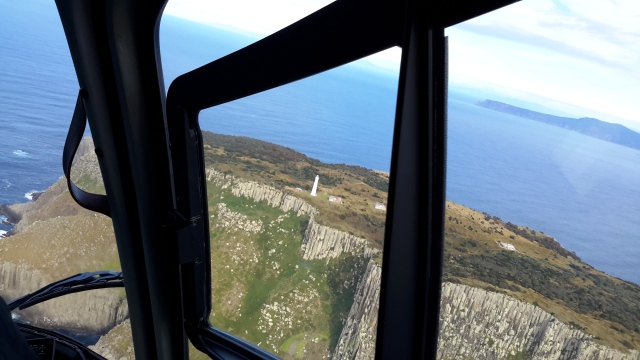 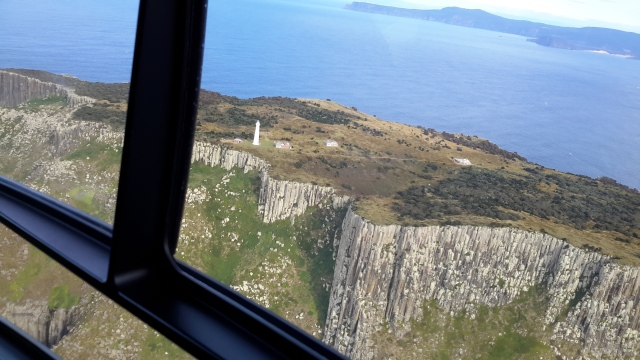 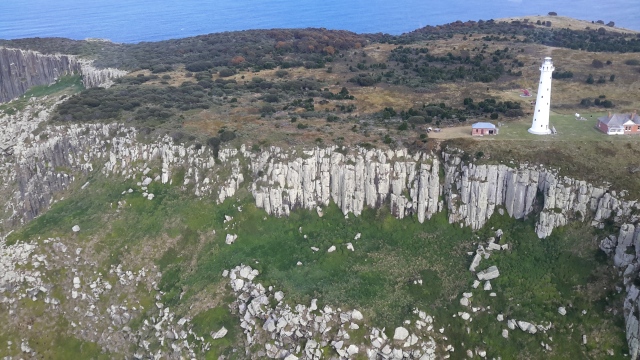 I seemed to stop breathing as I took in the grandeur, the scale and structure of the island, the blues of the sea and sky and distant hills, and the sense of privilege I had to be able to be in this position. The steep dolerite cliffs were spectacular. It was clear to me how these cliffs isolated those who had been caretakers of the lighthouse, from easy access by the outside world.

We could look down at the buildings on the ‘flat’ top of Tasman island, and we could look across at the strong vertical cliffs of the southern end of the Tasman Peninsula. Dramatic. Grand. Spectacular. 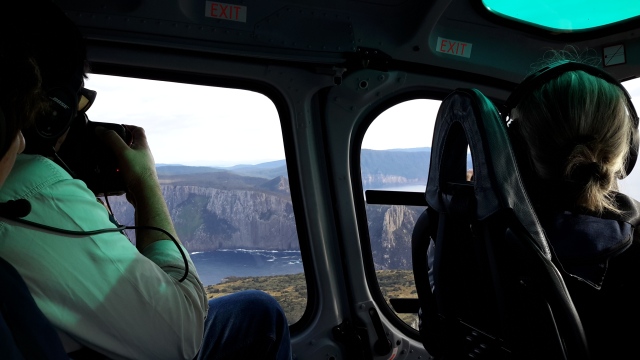 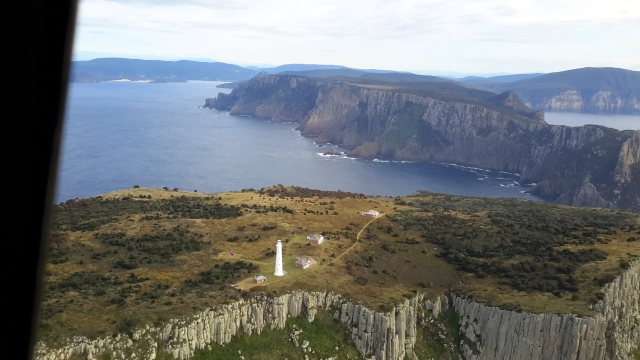 Our landing spot was on a cleared plot behind the lighthouse. The red shape on the ground to the left of the lighthouse in the second photo is the helicopter that flew off from Cambridge airport before ours. 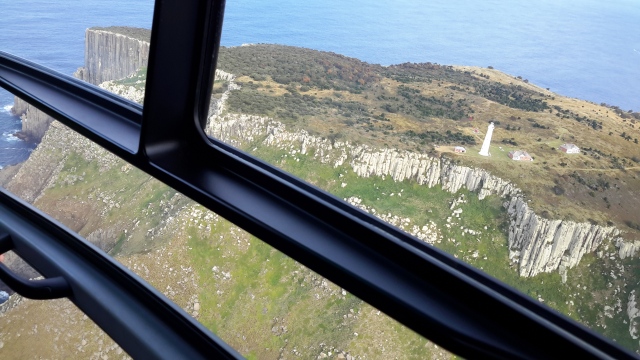 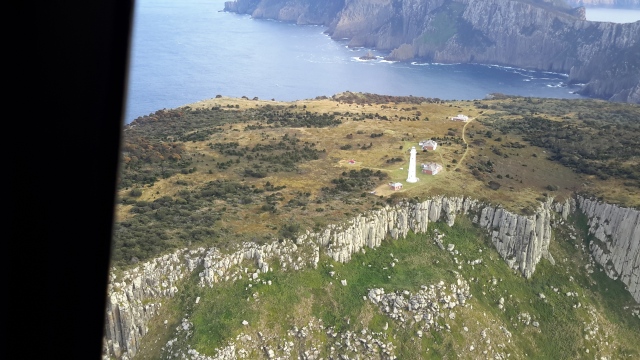 As our pilot brought us lower, the great ground view showed the location of the few buildings, the way the vegetation was clustered, and gave me a sense of where I might walk and not walk once out of the helicopter. 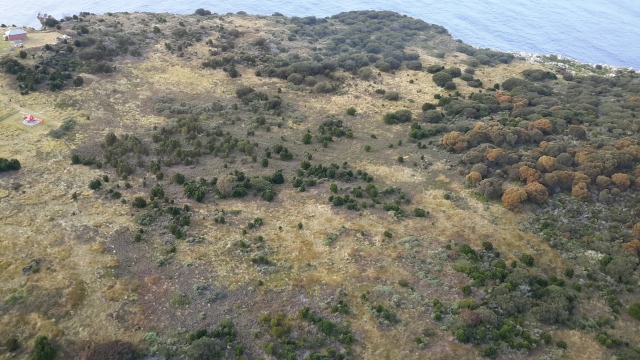 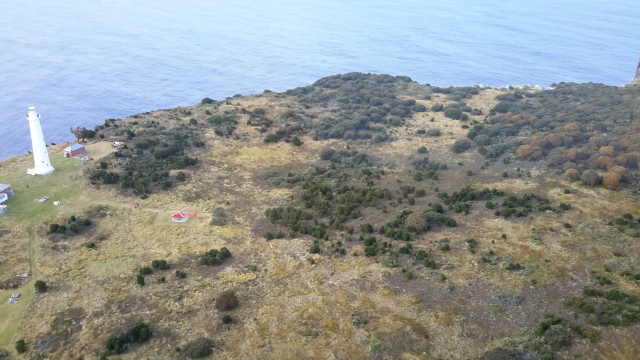 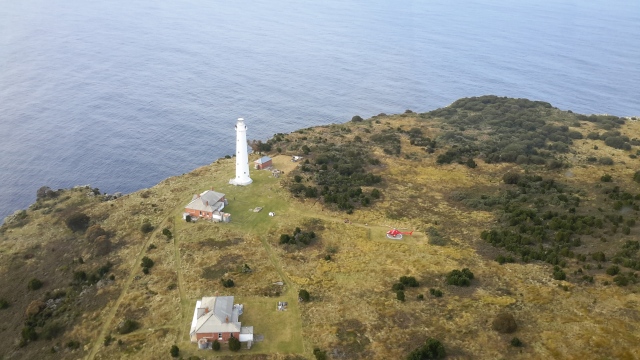 Soon we were on the ground. We had arrived on Tasman Island.