Posted on January 18, 2018 by Tasmanian Traveller

Hundreds of metres below, the remnant of the Gordon River can be seen flowing. 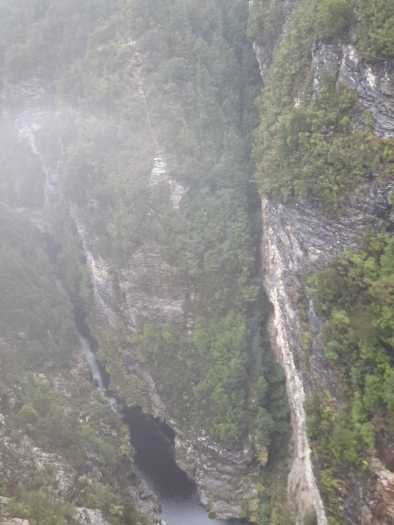 Wikipedia provides information about the river, the difficulty of accessing the area between the dam wall and the Gordon Splits:  “ Geraldine Brooks wrote a piece in the National Times of 24–30 May 1981 which Peter Thompson quoted in his Power in Tasmania as an evocative overview of the splits and their context. The Splits are a geological phenomenon. Six hundred million years ago, the powerful waters of the Gordon River wore a deep erosion slot through a rugged spine of quartzite. The river runs across the grain of the countryside, instead of following it. The result is rare and spectacular. From the air, the Splits seem to grasp the Gordon River like giant rocky pincers, squeezing its wide flow into narrow strips of deep water about 100 metres long. From the river bank below them, they appear like pieces of a giant’s unsolved jigsaw, craggy masses and voids of sparkling quartzite, frozen a few metres apart, never quite meshing in the first Split, the rock rises vertically for about 100 metres before it merges with the gentler mountainside.”

The Britannica explains “The Gordon River rises from Lake Richmond in the King William Range of the central highlands and flows southeast around a great bend to the southwest and finally northwest to enter the Indian Ocean at Macquarie Harbour after a course of 115 miles (185 km). Its principal tributaries are the Franklin, Serpentine, Wedge, Denison, and Sprent rivers. The largely inaccessible mountains in which the Gordon rises give way to rainforests in the lower valley, where valuable Huon pines with a high oil content are cut for milling. Explored in 1816 by James Kelly, who named it after James Gordon, an associate, the river is navigable by small steamers only in its lowest 20 miles (32 km).”